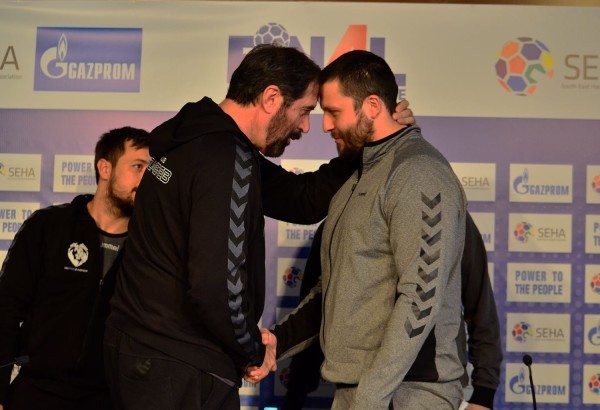 The SEHA GAZPROM League Final4 starts in Varazdin. The whole package of 5.000 tickets is sold out, four teams will fight for the trophy, 160 journalists will be in and around Arena.

MVM Veszprem will face Meshkov Brest at 18 hrs, while RK Vardar and PPD Zagreb will fight for the second place at final (20.30 hrs).

Here is what coaches of the Final4 teams have to say before the start.

-There is a lot of quality here. We’re satisfied with the place among best 8 teams in Europe but that is already behind us. Only thing that matter right now is Vardar. I know a lot about them, way they think and approach each match, I’ve spent some time there. They are favorites but we can beat anyone. This is important for both of us, to keep the level of self-confidence ahead of CL clashes against PSG and Veszprem.

We’re satisfied with the season so far and handball quality in SEHA League. We’ll play with final on our mind, that’s where we want to be on Sunday. Zagreb are having a really good season. Our is similar and we both have some injured players. This season is really important for us here in SEHA Gazprom League as we want to go all the way. League has once again proved to keep and even raise the level of quality on these fial tournaments from year to year.

This is a tournament of four great teams and fans will surely be happy with what they are about to see. You need to perform really good to take the crown. We will try to defend the title which brings additional pressure but it won’t be our first time to do such thing and we can cope with that. Meshkov are in good form and what we’re about to see is a good match in which anything can happen.

Reaching F4 is success for us already. Veszprem have throughout the season proved to play best handball in the League. I’d rather like to face off against PPD zagreb or Vardar in semis but we have what we have. They are one of Europe’s best teams at tht moment. For us it will be a big experience and I hope we’ll be able to keep the match narrow and that way look for our chance to catch final. Atman is injured and we’ll have to figure things out without him here in Varaždin.