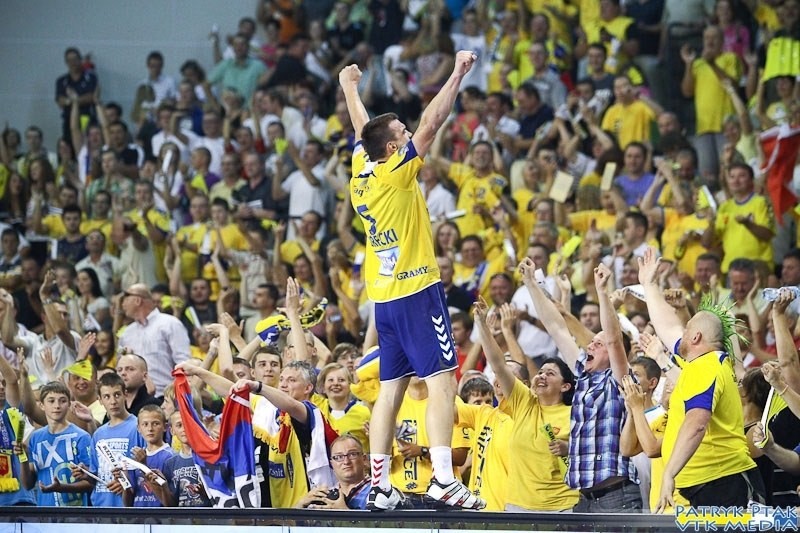 In the first leg match of the Champions League quarter final, Flensburg-Handewitt drew at home with Vive Tauron Kielce 28:28. After this absolutely close game, the final result of this two-legged tie is as open as it was before it began.

The host team started with two goals of Rasmus Lauge Schmidt. The Danish centre back soon became a leading player and had a few chances to get his team on the lead. This lead, however, wasn’t too considerable since Kielce players started scoring as well and in addition were backed by Sławomir Szmal’s saves. However, Szmal wasn’t the only successful goalkeeper on the court – Mattias Andersson was a great help to his teammates either, and his double save of Jachlewski and Reichmann was a cherry on top. The German team maintained a 1-goal edge for some time but after three penalty throws, the guests took the 7:6 lead in 11. minute. None of the teams would forge ahead and the result kept being close to draw. Kielce defence often made it almost too easy for Flensburg to score; it happened that the hosts scored being hardly touched by defenders. However, on the other side of the court Kielce would handle Flensburg’s defence too. By the end of the first half Holger Glandorf seemed to take over from Lauge and started harassing the Polish defence. With 1 minute to go, the referees made the audience and the Flensburg team quite angry by sending Hampus Wanne off for 2 minutes; the locals disapproved referees’ decisions before and this situation apparently was enough. It didn’t change much though as neither Kielce nor Flensburg managed to score before the final whistle and the teams left court with a 14:13 result for Kielce.

The Polish team began the second part by taking the very first 2-goal lead but that was all they could get as Glandorf continued his brilliant performance and scored twice for starters. A moment later Kielce found themselves being doubly short-handed after Aginagalde and Zorman were sent off but they did very well and managed to maintain status quo for these difficult 1,5 minute. After 10 minutes of the second half, Kielce started having problems in attack and in the 42. minute Flensburg was leading 22:19. It seemed like a good opportunity to forge ahead but Kielce quickly pulled themselves together and after 5 minutes they got back to the draw which maintained until the very end. In the 59. Marin Šego saved Lauge’s throw; Kielce wasted their chance by playing in attack too long but on the other side of the court Glendorf made a mistake as well. Kielce had 6 seconds to score but Andresson saved Ivan Čupić’s throw from the distance and the match ended up with a 28:28 draw.

The top scorer for Flensburg was Glendorf with 11 goals; for Kielce it was Čupić with 5.