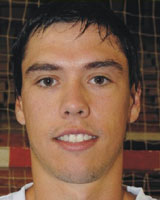 Ademar Leon announced their first signing this season. After playing in Eisenach for one year, Mikel Aguirrezabalaga returns to the club where he played from 2007 to 2011, with which he won the Copa del Rey 2008. The left back has signed a two-year contract. After leaving Ademar Leon in 2011, he played two seasons in FC Barcelona, and one season in Dinamo Minsk and Eisenach respectively. He also won the ASOBAL two times with FC Barcelna.