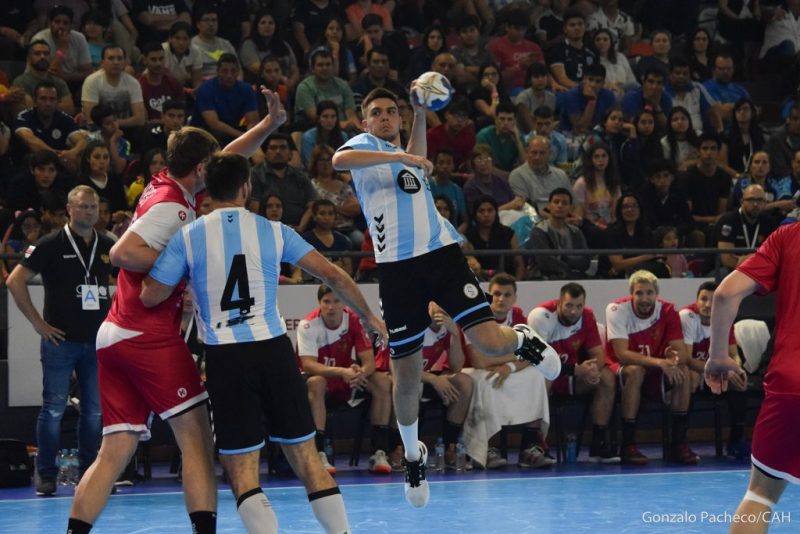 Argentina defeated Russia 24-22 on the opening day of the “Copa Provincia de San Juan”,  a four nations tournament that has also Spain and Poland as protagonists. This is the first time Argentina receives three European teams and they have started off well in front of an euphoric crowd who will enjoy high voltage handball until Friday.

On the opening match of the tournament, Spain and Poland tied 24-24. In an 8,000 seat capacity venue, the two teams debuted in the tournament that serves as a preparation for the upcoming EHF Euro 2020. While Poland traveled to Argentina with their full squad, Spain landed with their ‘B’ team, as the team preparing for the European tournament are in Denmark competing in the Golden League along with the home team, France and Norway.

During the first half, Poland took a small advantage, with great help of their goalkeeper Mateusz Kornecki. The KS VIVE Handball Kielce player was key for the conducted by Patryk Rombel, which reached the half time with a one-goal advantage (12-13). Despite being 5 goals behind on the second half, with 13 minutes left to be played (12-17), Spain caught up thanks to an improvement in defense and some fast breaks and in the end, they tied the match a few seconds before the final buzzer.

On the last match of the evening Argentina defeated Russia 24-22 in an electrifying match. It was the South Americans’ second triumph ever over the Europeans, who started off better in the encounter. They took the lead and 2-4 after the first few minutes, but an impressive performance by debutant Lucas Aizen (19 years-old, Taubaté, BRA) helped the locals kept Argentina close in the scoreboard and finish the first half 11-12 behind.

On the second half the match continued to be equal, but Russia took a 3-goal lead with 14 played (15-18) and forced Cadenas to call a timeout to re-group his team. The heads-up proved to be effective as Argentina scored 6 unanswered goals that put them 21-18 ahead and it was now Eduard Koksharov the one who called for a timeout. On the last minutes, thanks to a rock-solid defense and collaboration from goalkeeper Leonel Maciel, the hosts were able to keep the distance and finish with a victory on the first day of the tournament.

It’s inescapable to mention that the Argentina squad is not in it’s full. Probably the most resounding absence is that of Diego Simonet, but players of the likes of Federico Pizarro, Federico Vieyra, Santiago Baronetto are also out of the tournament, recovering from different injuries. The South American team has travelled to San Juan with quite a few less experienced players, but who have already shown why they also deserve to be taken into account.

Tonight, Spain will face Russia at 18:00 (local time) and Argentina will meet Poland at 20:30 (local time). Matches can be followed on the YouTube channel of Argentina’s public TV station.