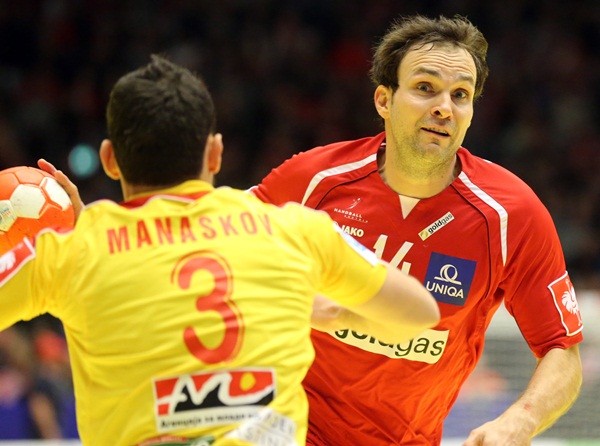 In the final leg of the main round Hungary met Austria.  Hungary had their eyes set on finishing third in the group and then playing for the 5th place of the EC. One of the best Hungarian players young right-back Ancsin was out of squad as his knee injury didn’t improve. His place was filled by young left-back Bence Zdolik. The Austrians aimed at getting their first points.

Hungary made a good start, after some fast goals they were leading by 3 goals (5-2 10th minute). The Austrians quickly equalized however and goalkeeper Marinovic saved two of Császár’s penalties  (5-5). It seemed that their match against Spain used up most of their strenght as their attacks were slow and circumstantial and in the first 20 minutes only Szilágyi and Santos were able to score. Hungary produced better play, their wingers were effective and successful penalties by Iváncsik meant that they were 3 goals up again. Their lead even increased by the end of the first half (13-9). Both defenses were acceptable but Hungary’s attack was faster and more exact, although their first goal from 9 meters came only in the final minute by Putics.

Austria’s score opened the second half, then Iváncsik missed two penalties in five minutes and after a failed pass Austria came even closer (13-11). Hungary could slowly increase their lead, Császár’s third attempt was succesful from penalty. It would have been important for Hungary to win by many goals to take 3rd place from Iceland but Austria didn’t plan on finishing without any points.  (42th minute 18-15). During a double advantage they equalized at the middle of the second half (18-18). Goals came from both sides but Austria managed to obtain a two-goal lead only a few minutes before the very end, which they were able to hold on to. Weak performance from Hungary meant that they had to say goodbye to their dreams of playing for fifth place.