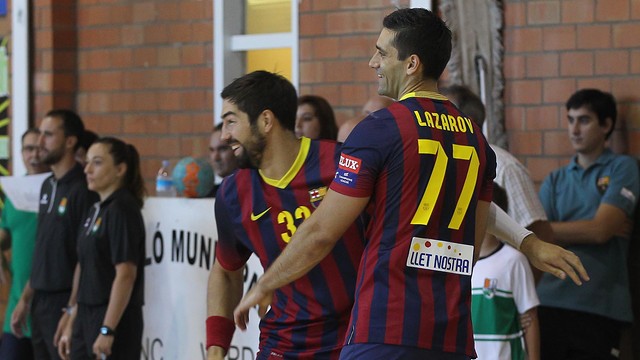 Spanish champions FC Barcelona have been seen as the first favorite of the VELUX EHF Champions League 2013/2014. Karabatic and Co. have got maybe the toughest possible rival in the TOP 8 phase – German Rhein Neckar Lowen, team who knocked out Polish Vive Targi Kielce at TOP 16. Barca’s TOP scorer Kiril Lazarov knows how difficult will be in the battle for VELUX EHF F4 in Cologne:

– Tough job is ahead of us. RNL play modern handball, but I am glad that we have them for the rivals, the toughest one in this moment. We like challenges. Clashes with “Lions” will be extremely tough, because they are the best German squad currently.

Macedonia star isn’t surprised with the success of teams from his country – RK Vardar and RK Metalurg.

– Macedonia should be proud on our teams which qualified for TOP 8. “Hats off” to Lino Červar, the person which knowledge Macedonia doesn’t use enough. He is the most responsible for all the successes of Metalurg in previous years and new generation of Macedonian players from club’s academy – said Lazarov and added a few words about Spanish coach on RK Vardar bench, Raul Gonzales:

– I worked with him three years in Ciudad Real. He established some new things in our game. That’s why I am not surprised with the success of Vardar. We worked together for such a long time and I can say that you can learn and “steal” some things from him – said Lazarov, who have a comment about last TOP 8 couple Veszprem – PSG:

– Veszprem are the favorites, but if PSG qualify for F4, that won’t be a surprise – concluded Lazarov.