Croatia through with 4 points after a magnificent match | Handball Planet 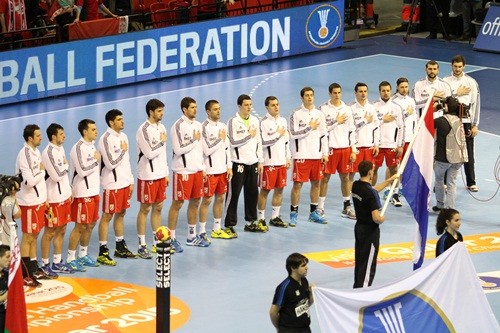 Convincing Croatia wins narrowly in a clash against Sweden, to secure four points for the Main round. It was tough to call a favorite on this one, as the result was close; within 2 goals for the most part of the match, with 25-24 being the final score. The Olympic vice-champions were boosted by the ‘Yellow Sea’ (as labeled by Tom Ó Brannagáin), as Swedish fans were crowding the BrondbyHallen. Their idols thanked them with a two-goal lead just 3 minutes before the half time, but 7 turnovers made in the first half proved too much for Croatia to miss out on. The last minutes of the match saw Croatia with the narrow lead as both Johan Sjostrand (14 saves, 38%) and MirkoAliliović(6 key saves) did well for their teams when it counted the most.

In the first 8 minutes of the match it was DomagojDuvnjak against Sweden, as Croatian star was 3/3 from the field at 3:2.Croatia was better in converting chances into goals, with accuracy just under 50 percent (10/23, 43%) in the first half. It was the line-player position where the coaching duo Ola Lindgren and Staffan Olsson decided to strike the opponent, as Nilssonscored two, while creating chances, sneaking behind the back of Gojun. Sweden had a spell of good play between 10th and 20th minute, as the outscored Croatia 6:4, but the lead was short-lived, as Alilovićagain prevented goals from Petersen and Ekdahl Du Rietz, allowing Ćupića fast-break goal to take the lead. Half time ended with a relatively low score for both teams, at 10-9 in Croatian favor.

Sweden got back on level terms right from the start of the second half with a goal from Ekberg.Sjostrandwho replaced Andersson on goal earlier, did vey well to keep the notorious Croatian wingers quiet from all areas. Sjostrand magnificently parried Štrlek’s fast-break effort, just as Ekberg tied to 16:16. The 50th minute was key to the match, as Croatia gets a two-goal lead through Štrlekwho scored from the fast break. Difference was back to one, after time-out from Sweden, as they wasted no time chasing the game, but Sweden fans might feel it was of no avail, as it was the closest they could get before conceding again. The score went to +3 at 20:18with an effort from the amazing Buntić scoring 6/7 overall.Swedish left backKarasson’s 5th goal of the match, brought Sweden within a chance, but the effort was swiftly answered by Buntićwith his 5th goal of the match, 5 minutes until the end, at 22:19.It was Karrasson again under the spotlight, with two minutes until the end, but for all the wrong reasons, as he puts his hand out, to prevent Bićanić from scoring a clear-cut chance, earning himself an early bath.Horvat set 25:23 from the fast break, followed by a consolation goal from Nielsen, who forcefully smashed the ball in the top-right, to relieve the frustration of loosing 25:24.