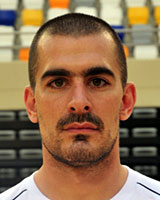 Swedish playmaker Dalibor Doder won’t be ready to help his team-mates from German GWD Minden in relegation battle in DKB Bundesliga. He suffered knee injury in the first match with new coach Sead Hasanefendic against TuS Lubbecke 34:23. “Key player” for Minden’s squad didn’t broke ligaments fortunately, so he will be out of the court only six weeks, but that means Doder will miss the most important matches of his squad in the finish of the season.