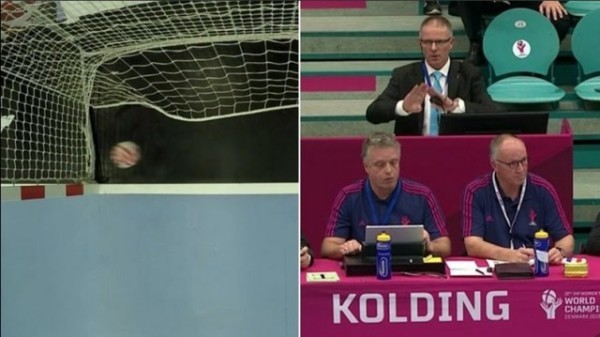 Sydbank Arena witnessed a very exciting match between South Korea and France last night. It was so thrilling and even that both halves ended in a tie (11-11, 22-22). And in such an equal match, you’d expect some tough calls from the referees. While the use of technology can be a tool to support their decisions, this time it was a double-edged sword.

It was on the 16th minute when Hyunji Yoo shot towards France’s goal and the Icelandic referees Anton Gylfi Palsson and Jonas Eliasson decided to call for the goal-line technology in order to determine whether the goal was licit or not. According to the IHF statement, the technical official Bjarne Munk Jansen, fron Denmark, was shown only a part of the video, in which the ball hit the crossbar and bounced on the line. Based on this revision, he informed the referees and they decided to call overturn their previous decision and gave the ball to France.

On the report, the IHF advises that the technical partner for the Video Proof System did not show the entire play to the technical official and table delegates, which caused them not to be aware that the ball had previously crossed the line, as shown on the capture published by Handnews.

After a meeting last night, this was decided by the responsible bodies of the IHF:

– Despite successful use at the 24th IHF Men’s Handball World Championship in Qatar and through the first match days at the 22nd IHF Women’s Handball World Championship in Denmark, the Video Proof System will not be used for the rest of the tournament as the margin for error cannot be completely excluded. This decision will be re-examined in the future as technical support is still viewed as important, and the System will be further refined to ensure maximum accuracy.

– The IHF official, table delegates and referees involved in the match shall not officiate any further matches at the 22nd IHF Women’s Handball World Championship in Denmark.

The System was also used earlier yesterday, also in Kolding, during the game between Congo and Brazil, where the Africans were denied a goal as well; however this particular situation could have been the difference at the end of the game, which resulted in a draw. As mentioned above, technology can be a tool to help referees reduce the error margin, an understandable human error, do you agree with the decision of not using Video Proof System for the rest of the tournament? Will we make the onus on the referees on the tough calls in the following matches knowing that there’s a way to support their decisions? The debate is on.