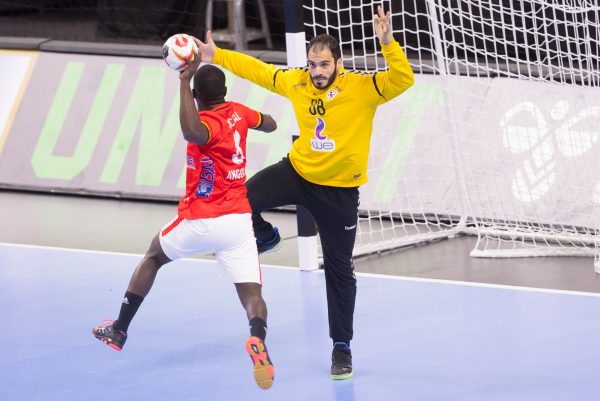 With two victories and a draw, Egypt are through to the main round for the first time in 18 years. After a triumph against Angola earlier today, they have sealed their ticket among the tournament’s best 12 teams.

In a clash of African nations on the first match of the day at the Royal Arena, Egypt defeated Angola 33-28 and booked their tickets to the main round. It was a tight start and after 6 minutes the score was 3-3; but Egypt found the way to the goal of Giovany Muachissengue and after 10 they were leading 6-4. Goals from Yehia Elderaa (3) and Mohamed Mamdouh extended the lead to 10-4 at 14 minutes.

The African runners-up had the lead for the entire first period and were able to extend it to +7 after 30 minutes to go 19-12 to the locker rooms; thanks to some saves from Karim Hendawy and to the many mistakes on the finalization from the Angolan players. The second half saw an improvement of Angola, who would actually win the half (14-16), but the difference obtained on the first period by the ones coached by David Davis was too much to overcome by the less experienced African team.

“I think we didn’t believe, and we didn’t think that we could make it this way, so we lacked this attitude, this belief in ourselves to fight. It’s a shame because we felt that we had the chance, the opportunity, but we couldn’t make it. But I have to say that this experience has been great, we have a group of young players that, we hope, can use this experience in a positive way for the upcoming tournaments”, confessed coach Filipe Cruz after the match.

HP: How do you think this experience will help, back home, to attract more players to this sport?

Cruz: “We could get some benefit from these performances, we believe that even if we can get 1% more of players who are interested in the sport, it will be positive. This championship was a great display and promotion for our sport, and we are not indifferent with that; maybe some children are motivated now to take up the sport, and also the social networks contribute a lot to the massification of the sport”.

David Davis was happy to take Egypt to the main round after 18 years: “My goal was to bring the team back to the best 12 teams in the World. From the beginning I was thinking about this, but I didn’t know if it would be possible because we were starting from zero with a new system, we had to change a lot of things and we only got to play 5 matches before the World Championship, so I’m really satisfied that we’re not playing the President’s Cup”.

Egypt will be back in the main round after 18 years. That last time they finished 4th in France 2001. This time, they will continue their journey in Herning, while Angola will remain in Copenhagen for the President’s cup.