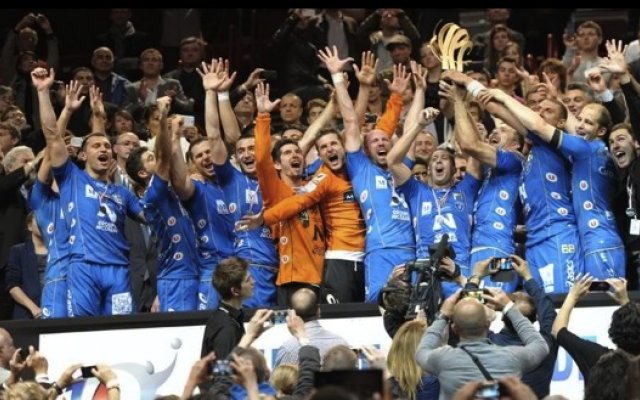 This year German capital Berlin will host the final of the EHF Cup. In 2013 Rhein-Neckar Löwen were victorious defeating home team Nantes. Germany will also be represented this year by one team. Apart from  the trio of Montpellier, Constanta and Pick Szeged, Füchse Berlin will try as hosts to win the title after already grabbing the German Cup. Three out of four competing teams were originally to play in the CL but they lost their Wild Card matches, while Constanta failed to qualify from the qualification tournament.

Montpellier had the easiest route to the F4. They won all their matches and seem to be the odds-on-favourites.  Only Sporting of Portugal were able to play a tight match against them. In the quarter-final they played fellow countrymen Nantes. The first match was very exciting but the second leg was painfully one-sided and Montpellier got past their home rival without any difficulty.

Berlinwere aware that if they qualified from the group they wouldn’t have to play any quarter-final match to advance into the F4.  Constanta who were in the same group with Füchse had a more difficult path however. They either should have won the group or be among the three best second-placed teams to be able to play for the F4. Their match in Romania was a draw but in Berlin Füchse won.  The Germans also grabbed 3 points against Chambéry and Hlolovec thus winning the group while HCM were second.

Pick Szeged had a rather unlucky draw. Apart from TatranPresov and Swedish side Kristianstad they also had to face last year’s finalist  Nantes who had many world champion players in their squad. The Hungarian and the French team were the biggest favourites and they won all of their home matches (even against each other). But in the final round Presov surprisingly defeated the French giving a huge helping hand to Pick Szeged to finish at the top of the group. Szeged then got past Sporting more or less without problems.

In the semis Berlin will play Pick Szeged, Montpellier will face Constanta.

Berlin and Montpellier seem to be the top contenders however neither team can expect an easy match. Injury-stricken Berlin should still be able to defeat Pick Szeged if we take Szeged’s current form into account. But Pick, enforced by  many national team players and top coach Juan Carlos Pastor, might also be able to smash Füchse’s dreams if they produce solid teamplay and great concentration.

In the other pairing Montpellier seem to be the stronger team. Omeyer and Accambray are most likely to leave the team as EHF Cup titleholders. But they will need every bit of concentration against the highly motivated Romanian side.