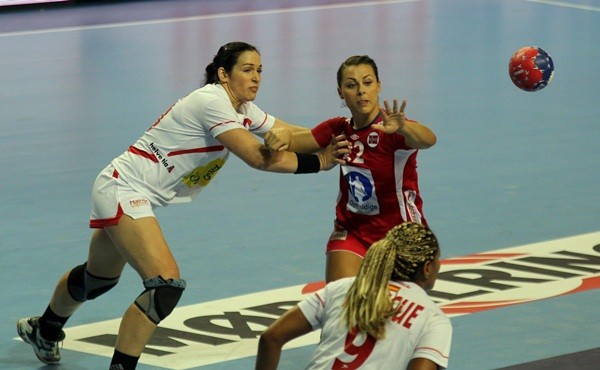 Norway are the first semi-finalists of the Women’s EHF EURO 2014 in Hungary and Croatia. Norwegian girls won the first place in the Main Round Group in Debrecen by beating Poland 26:24.  About the second traveler to Budapest will decide the clash of the last round between Denmark and Spain on Wednesday.

In the first match of the Day, Romania showed once again TOP class by triumph over Spain 22:20.

After quite a surprising and good match, Norway beat Poland 26:24.

Having in mind previous games of the teams, for Poland game against Norway could be considered as fighting a losing battle. Coach Rasmussen decided to give a chance to young or less exploited players; the only “old” faces were Karolina Kudłacz and Kinga Grzyb. He also could finally use Kinga Byzdra who couldn’t play before due to injury.

Surprisingly enough, the second squad took a very good start and soon took the lead. In the 6. minute Poland lost Kudłacz who got injured and got back on the bench but as it turned out, her team mates managed as well without her. After 10 minutes Norway was 3 goals behind (3:6) and coach Hergeirsson called for a timeout but instead of improving their performance, they let the gap increase. Poland looked very good in attack which mostly was an effect of amazing performance of young pivot Joanna Drabik and right back Aleksandra Zych. Also goalkeeper Anna Wysokińska, who replaced Małgorzata Gapska in Polish squad, had a superb time. After 20 minutes Poles reached 5-goal-advantage (11:6) and almost kept it until the end of the first half which ended at 15:11 for Poland.

Poland were continuing their good performance after the break. However, in 35. minute Byzdra got 2-minute-suspension and from this point Norway starting catching up. Polish shot inefficiency and a couple of saves by Silje Solberg resulted in 18:18 draw in 40. minute. Nora Mork was unstoppable and it took Norway 6 minutes to take 3-goal-lead (22:19). Poles started having problems with Norwegian defence; what is more, Solberg managed to save a penalty throw for 24:22 in 53. when there was still a chance for Poland to equalize or win. Norway didn’t let the victory slip out of their hands and won 26:24.

Best players of the match were Mork for Norway and Drabik for Poland.

Denmark took the 23:20 victory over Hungary.

The game didn’t begin well for the hostesses as they conceded 3 goals in a row but excellent performance of Eva Kiss and Zsuzsanna Tomori allowed Hungary to caught up (5:6, 13. minute). However, Danes pushed ahead again and only thanks to Kiss Hungary left the court losing by 2 (9:11).

2 minutes after the break Hungarian crowd went crazy when their team equalized at 11:11 but Denmark immediately got back on the lead. Danish team were slowly but surely making the gap bigger while Hungary looked more and more helpless. With outstanding Sandra Toft in the goal, Denmark gained 7-goal-advantage (22:15) in 50. minute. Hungary tried to caught up but only managed to reduce the gap to 3 goals and lost 20:23.