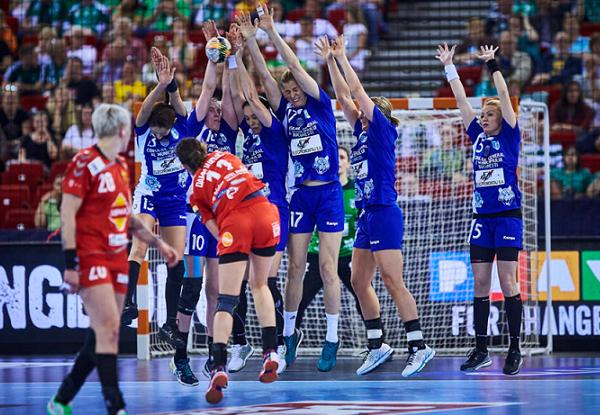 “I just can say congratulations to Bucuresti for this great game and to Jelena Grubisic for her outstanding performance”. That’s how Andrea Lekic started off at the post match press conference. She might have been thinking of how to explain the inexplicable. A completely unknown Vardar had just been crushed and therefore, kicked out in the semifinals in the hands of a team that has been an example throughout the entire season in this Champions League. “We’ve played the worst match of the season”, lamented the coach David Davis, who had just seen his team unable to live up to the expectations. “We definitely couldn’t come back in the game”, reaffirmed a broken Lekic.

Kim Rasmussen, on the other hand, looked calm, as if trying to absorb what had just happened: “It’s unbelievable how the players fought and I’m happy to put them on the way. Everyone now can see how dangerous we are on the court”. And of course, he made a special mention for the MVP, the Croatian goalkeeper Jelena Grubisic: “She helped us, that’s how is it with high level goalkeepers, they are winning many games”. And this was undoubtedly one of them. Carmen Martin had also mentioned it in the mixed zone: “We’ve had the great fortune that Jelena had shut down the goal the way she did. She just shut it down”. The Spanish right wing praised her teammate with an evident happiness: “I’m really happy for what we have achieved”.

Isabella Gulldén looked back to when Bucuresti was in the fourth place of the Main Round in this competition and reflected on how things had changed from then on: “I think a lot changed. We got Linnea back, that’s a big change for us, because of her shoot. The team came back as a new team after the national teams competition. I think we have progressed too much since then”.

But the party for Bucuresti, was a nightmare for Vardar. “We have missed too much for a match like this. The defense was really really bad, the attack was bad… and probably our self-confidence went down, so everything was bad today from the first to the last minute”, explained the captain of the Macedonian team, who tried to put into words what had just happened in what seemed to be one of the toughest matches in her career. The Serbian centre back, who took all responsibility on her shoulders during the match when the scoreboard looked insurmountable, was an example of tireless strive and commitment, she showed a great fighting spirit to try and turn a very tough situation around. But handball is a team sport, and it didn’t look much like it yesterday for the team of Skopje; that’s why sometimes the effort of one player is not always rewarded accordingly. Yesterday’s match was definitely one of those where the dedication put throughout the year should’ve been displayed on court and it was, without a doubt, the worst time to make that many mistakes. “We have to come back next year and try to get the trophy”, concluded.