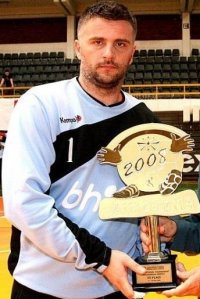 Bosnian handball legend, Enid Tahirovic (41) has ended his proffesional career last December with three matches for FA Goppingen. After four succesful seasons in Germany, Tahirovic began to work for Bosnian Federation in order to prepare hosting of Junior WCH 2013 next summer. Despite he decided to finish playing career, Tahirovic has got an offer from French super-team, PSG:

– My manager told me that PSG is interested for me, but I didn’t even think about that. My decision is definitive. Body said that is enough, so I won’t play anymore – said Tahirovic for Druga TV.