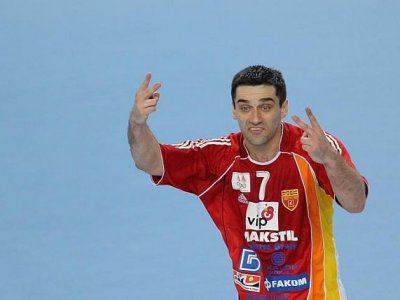 Here is the another look on Wednesday matches of the EHF EURO 2016 qualification start.

3.000 balls – Serbian Handball Federation gave to the clubs before the match between Serbia and Montenegro in “Pionir” hall in Belgrade. That is the donation of EHF and IHF.

13 goals scored Kiril Lazarov in the match against Switzerland. Macedonia beat old rival 27:20. Lazarov began match in classy style with 5 goals in the first 10 minutes, which were the sign for the fantastic evening…

31.6 was an average age of Serbian starting line-up for the match against Montenegro (25:21). It could be even much higher without the only player under 30 – youngstar Darko Đukić on the right wing (33.5 years).

6.000 fans watched the match between Serbia and Montenegro 25:21 in “Pionir” hall in Belgrade.

19 years was the difference between the youngest and the oldest player in Serbian starting lineup. Dalibor Čutura is 39 years old (1975), while Darko Djukic is 19 years younger (1994).

16 goals scored Austria in defeat against Spain (16:27). That was the lowest number in nine matches on Wednesday.

17 goals was the biggest goal difference in the most convincing win of the night by Iceland against Israel 36:19.

6 from 9 matches on Wednesday was finished by wins of home teams with five and more goals. The chance to smash their rivals only missed Serbia and Hungary, while match in Belarus had no winner.

36 is the highest number of goals scored by a single team – Norway and Iceland.