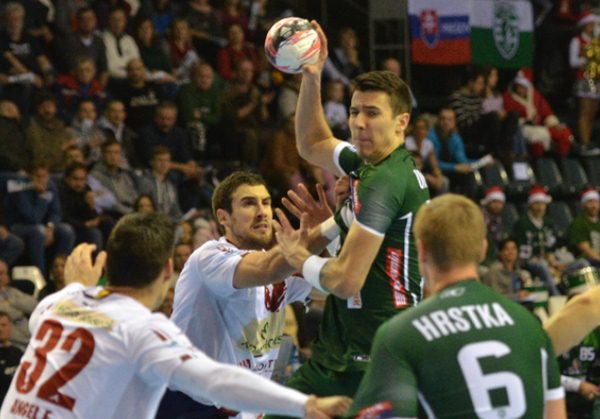 In the 3rd round of Group C in the Champions League TATRAN Presov lost to Naturhouse La Rioja 27:33 in the Spanish city of Logrono.The Slovakian champions played an excellent 1st half that they deservedly won 18:16. In this part of the game the right back of TATRAN AlexeyPeskov scored 7 goals out of 7 shots.The home team decided about their win in the first 12 minutes of the 2nd half, which TATRAN lost 1:8.In this phase the Eastern Slovakian side could not manage to beat an outstanding home goalkeeper Aguinagalde Aquizu. In the last 15 minutes of the game Naturhouse comfortably controlled their 5-6 goal lead until the end.

The coach of TATRANPresovRastislav Trtik speaks about the game of two different halves: “In the 1st half we were clearly better team, even though our defence did not work the way we wanted. We were efficient from the position of backs, where Alexey Peskov dominated. We did not start the 2nd half according to our concept. In first 12 minutes of this part we managed to score only one goal. Unfortunately our tactics stopped working. We had a low shooting efficiency. We were not able to convert clear chances. This time our goalkeepers did not succeed at all.”

The captain of TATRAN and left back of the Slovakian national team Radovan Pekarconfirms the words of his coach: “The match was specific from two points of view. On one side we can be satisfied with our team performance in the 1st half. On the other side we cannot tell the same about the 2nd one. It is a pity that we did not repeat our 1st half performance in the 2nd part of the encounter. In the 2nd half the home team could rely on brilliant saves of AguinagaldeAquizu, who decided the game.”

The left wing of TATRAN and Czech national team Jakub Hrstka, who scored 6 goals in the game, is convinced that TATRAN could reach a better result in Logrono: “We started the game in an outstanding way. We played a high quality game in defence. We were concentrated in attack. That is why we deserved to win the 1st half. Unfortunately in the 2nd half we were weak and inefficient in attack. We were not able to convert 100% chances to score. La Rioja used that and won the game.”

The centre back of TATRAN and Slovakian national team Lukas Urban claims that TATRAN deserved their credit for their performance in the 1st half: “In the first 30 minutes we played very well. We won the 1st half by 2 goals. In the court we fulfilled what we prepared to play before the game. We did not manage to keep up with Naturhouse in the beginning of the 2nd half. We lost first 12 minutes of this part 1:8, which decided the game. Now we have to focus on an Extraleague encounter in Sala and Champions League match against Elverum Handball. We want to win both games.”

The line player of the Slovakian champions Leon Vuckowas also satisfied only with the first 30 minutes of the match: “The 1st half was great for us. In the 2nd half we played really badly. We missed too many easy shots on goal. We do not have a lot of time. Now we have to focus on games against Sala and Elverum Handball.”

After incomplete3rd round of the ChampionsLeagueGroup Phase TATRANPresov are 4th in Group C with 2 points for 1 win and 2 losses. In the 4th round the Slovakian champions host Norwegian champions Elverum Handball. The game is scheduled for Saturday 15 October 2016 at 16:00 CET in TATRAN Handball Arena, Presov, Slovakia.

Chekhovskie Medvedi beat RK Metalurg Skopje 25:21 in the first match of Round 3.