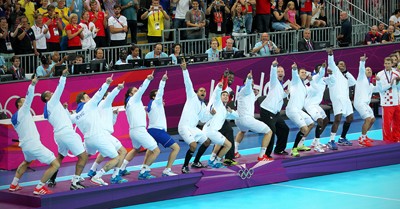 Members of French and Swedish NT shared different type of energies after the Olympic Final in which France repeated fantastic success from Beijing:

Coach Claude ONESTA (FRA): “BEIJING 2008 was about us winning the Olympic gold after years of trying and people expecting us to add that gold medal to our collection. It was the only one we had not won. So it was relief to get it four years ago. This triumph here in LONDON is totally different. It was a situation where we had an old team of players who wanted to show everyone who doubted them that they were still able to be Olympic champions. That they still had the ability and skills to win an Olympic gold. And, I am delighted to say, they certainly did just that. They showed they were not too old or finished.”  ”We had a poor European championships where we could not find any rhythm or form. Therefore people started to doubt us. But the whole team worked so hard in preparing for this competition for months and months. “I always believed in my players. I always believed that they still had one more excellent big competition in them, and that they could rise to the occasion here. So I am so happy for all of them, and the fans who came here to support us so noisily.”

Player Jerome FERNANDEZ (FRA): “This is the most beautiful day in my life. But now it is so hard to think how we can ever repeat this. How will be follow this up and do it again in four years time? I am so proud of my team because for eight weeks we have worked really hard and prepared so well to give our best effort here. We have won another title and it feels so fantastic.”

Coach Ola LINDGREN (SWE): “I am disappointed. We fought all 60 minutes with strong defence and active attack. It’s hard to lose the final with just one goal difference. Yet we are proud about our team. Everybody expected France to play in the final but hardly anybody thought of us as potential finalists.”

Player Tobias KARLSSON (SWE): ”We fought well as we have been doing in all games of the Olympic competition. We were close to success but didn’t have enough power to accomplish our winning task at the end.”