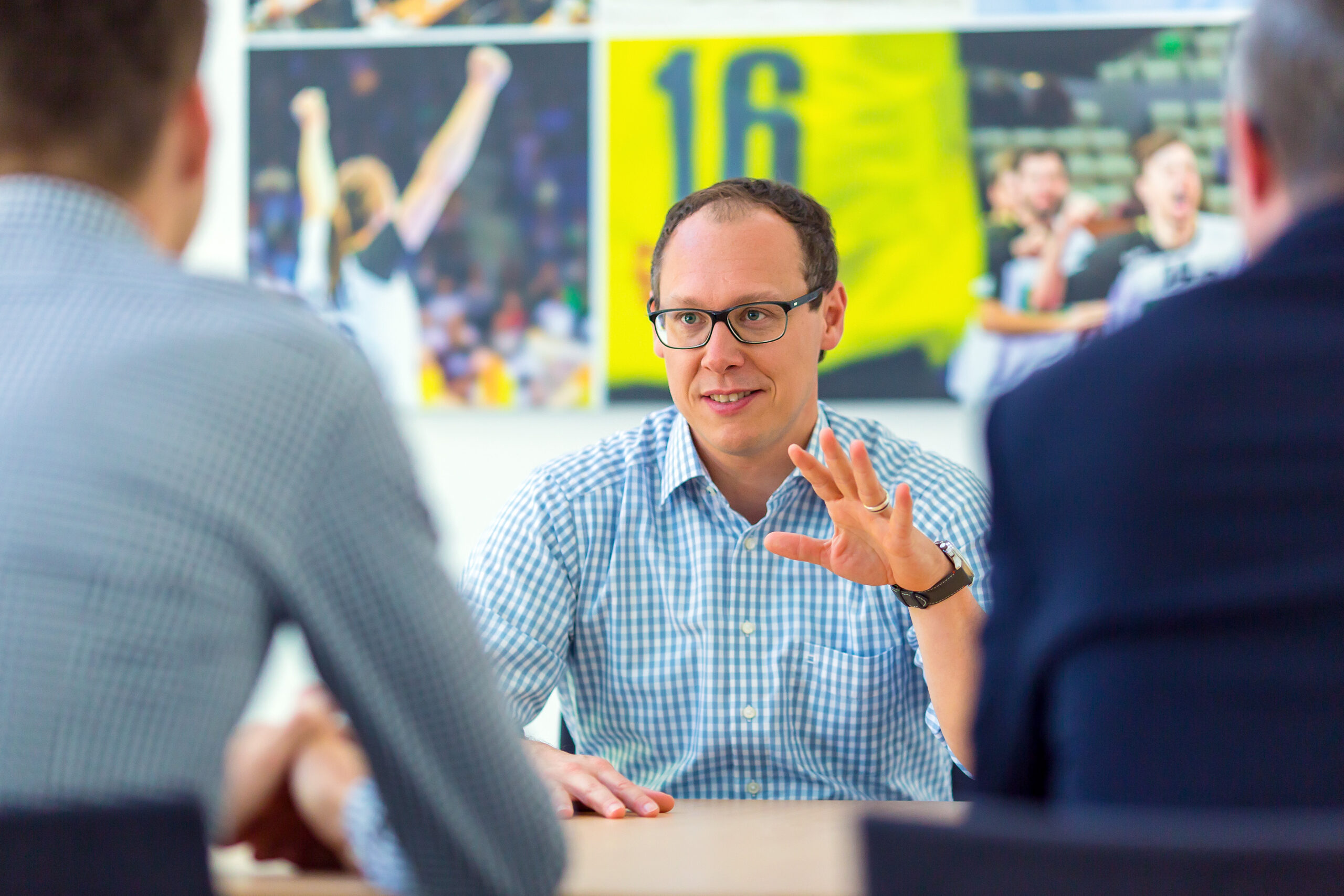 Interview with Mark Schober, CEO of the German Handball Federation, on the German bid for the Men’s EHF EURO 2024.

„Great sport, great engagement“ is the motto of the German bid for the Men’s EHF EURO 2024. This motto is
based on several different aspects, which underline the opportunities Germany can deliver to the European
handball family, including all EHF Member Federations, who will award the EHF EURO 2022 and 2024 host at
the EHF Congress in Glasgow on 20 June 2018.

In this interview, Mark Schober, CEO of the German Handball Federation (DHB), talks about the major aspects of
the German bid and additionally explains how the whole European handball can benefit from this special event.

Mr. Schober, what does the slogan “great sport, great engagement” personally mean to you?

Mark Schober: On the first hand, we talk about a great sport event in a handball-crazy country. Millions of Germans regularly watch handball matches on TV and fill the arenas on matchdays. We have more than 750,000 active players in more than 20,000 handball clubs. Handball is indoor sport number 1 in Germany – in terms of interest, active players and viewers, therefore, handball is a very important sport and the people are excitedly looking forward to hosting another major handball event such as the Men’s EHF EURO 2024.

In terms of arena capacities, Germany 2024 wants to become be a milestone for European and global handball. What is your plan?

Mark Schober: Our bid includes the potential for a new world-record handball audience in the opening match, which shall be located in the ESPRIT Arena in Düsseldorf, for which we expect up to 50,000 spectators. Besides that very special venue, all other arenas in which we plan to host the games of the EHF EURO 2024 fit more than 10,000 fans, including the famous LANXESS arena in Cologne, the home of the VELUX EHF FINAL4 since 2010 or the Barclaycard Arena Hamburg, which was the setting for the final weekend of the successful Women’s World Championship 2017.

In case Germany will be awarded to host the EHF EURO 2024, it would be the first ever European Championship with 24 teams in one country – what are the main advantages of this strategy?

Mark Schober: At first, we have short distances for all groups of participants, such as teams, fans and officials. At second, we can count on a great infrastructure in terms of logistics, travel, accommodation and hotel capacities in all potential host cities and all across the country. Germany is easy to reach from all European countries by plane, train or car, we are in the heart of Europe and all inner-German travel infrastructure such as motorways, high-speed train connections and flights are of highest global standard. But that’s not all: A single host of an EHF EURO event does guarantee that one more team can clinch its berth for the final tournament, compared to two hosts.

This idea is part of the concept to support handball across Europe – what does this mean in particular?

Mark Schober: Germany cares about the development of the whole European handball family. Thanks to the significant revenue potential of the EHF EURO 2024 held in Germany, for which we plan to sell around 750,000 tickets, the European Handball Federation will greatly profit, which obviously means that all EHF Member Federations will profit as well, as the EHF will have the opportunity to spread more money for the development of handball throughout whole Europe. We can provide the EHF with a higher potential for more investments in the future of European handball. And we as the German Handball Federation also have our own plans for partly re investing profits of the EURO 2024 in programs that aim to support the developments of handball in Europe. As such we are planning a youth training and development program in Germany for lesser developed EHF member associations and we want to stage a significant handball business and marketing summit for all EHF members to increase the professionalism on the administrative side of handball as well.

What can fans expect from an EHF EURO 2024 in Germany?

Mark Schober: Of course, it is the great hospitality and the long tradition of a highest level in organizing major sports events in handball and in general. Please let me point out that seven out of ten million foreigners living in Germany come from countries, which are Member Federations of the EHF! This means that millions of European handball fans will have the great opportunity to support their national teams in Germany, close to where they live. We expect a high number of away fans and people from other countries, who live in Germany, in the arenas. This will cause a great atmosphere. The arenas will be full, regardless if the German team is on court or not. For example, all matches of the final weekend of the Women’s World Championship 2017 were sold-out by more than 11,000 fans each, although the German team did not qualify. Or look at the audience figures at the VELUX EHF FINAL4 in Cologne. Even without the participation of a German club, 20,000 fans are part of this event.