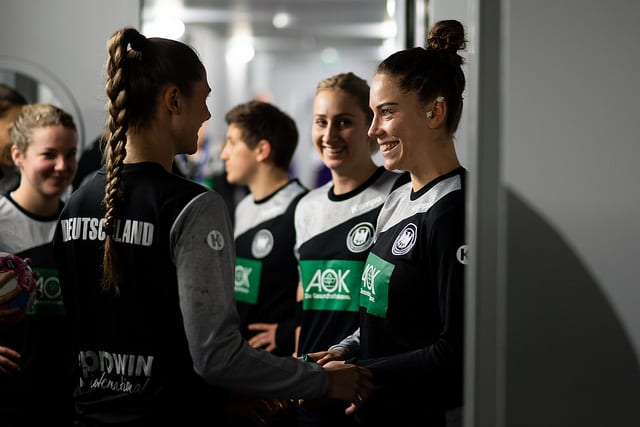 Germany defeated Czech Republic by 30-28 in their last match of the group round in Brest and is now through to the main round with two points. Despite being up by 5 in the first half, the Czechs could not hold on and lost their chance to advance.

Both Germany and Czech Republic were coming into the match with chances to advace to the main round. Sure, Germany looked with the better options as they had already won one match, against Norway. But as Groener mentioned after that important victory, it wouldn’t mean anything if they couldn’t progress in the tournament. Czech Republic were coming from defeats against Romania and Norway, however, beating Germany would put them in a favorable position. While they depended on Norway’s draw or victory against Romania, winning by 8 would put them straight into the next round.

The match was really tight from the beginning, with the conducted by Jan Bašný taking the lead, with a very good first minutes from goalkeeper Lucie Satrapova and team captain Iveta Luzumova, who scored five times before leaving the court at 17’ with pain in her left elbow due to a tough crash against a teammate. The Czechs were leading by 4, but in the absence of Thüringer’s centre back, the Germans took advantage and shortened the difference. With a good performance by 20-year-old left back Emily Bölk, they leveled up and with only 10 seconds left to play, Meike Schmelzer tied the score in 16.

On the second period, it was Germany the one that took the lead. With a few good interventions from Dinah Eckerle and goals by Schmelzer, Marlene Zapf and Alina Grijseels, Groener’s squad built a +4 lead that would help them through the rest of the match (24-20 at 17’). While the match was already lost for them because of three goal difference with very little time left, the Czechs continued to fight, as they usually do, but time was not enough to recover. Iveta Luzumova was the top scorer of the match with 10 goals.

Henk Groener looked happy in the mixed zone, where he expressed his satisfaction with the team’s performance: “The team has a great morale and a great fighting spirit, which they showed already in the first half. We were too reluctant in defense and we gave them too much room, and we were also too nervous and not focused enough. We talked about it in the locker room and the fighting spirit brought us back to the draw already in the first half, and slowly and in the end I think with Aline Grijseels in the middle and three right-handed back players we got more grip in our offense and we could take the lead and at that point we got more confident and played better and better”.

When asked about the things he liked the most from his team on this group round, the Dutch coach did not hesitate: “I liked the fact that they never gave up, no matter how far we were. For example in the game against Romania we were 9 goals behind and they never gave up and fought for every ball; same today, we were 5 goals behind and played very badly on the first part of the game, so it’s easy to give up and not come back in the game but they have a tremendous morale and team spirit, and that’s what I like the most about this team”.

Still amazed by the win against Norway last Saturday, Groener can now count with two points in the main round and he couldn’t be happier about it: “We knew that the game against the Czech Republic was going to be the decisive one to go to the main round. We didn’t count on points against Romania or Norway, so the first match was a surprise for everybody, but I must say we had a great performance in that game and played without any pressure and showed how good we can play. So we now have two points we did not expect to have, so we’ll see what comes from here. We have three teams ahead of us that will be tough opponents, I don’t think we can predict any outcome or any results as the other group was also close, but we’ll fight for victories and see where it will take us”.