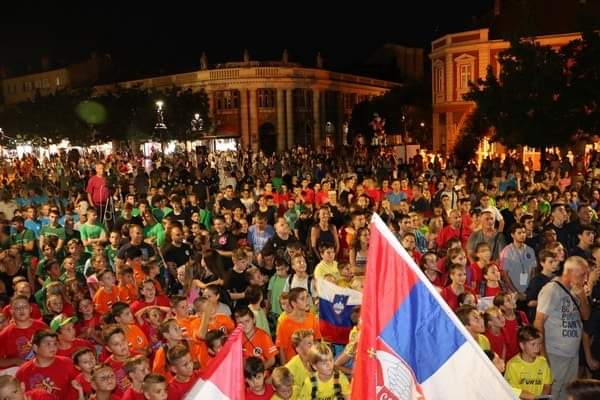 One of the best handball stories from Serbia in the last few years comes from a city that is not known as a handball center, nor where the playoffs of the national team came from. Although it seemed that Nenad Martic’s idea of ​​organizing the Smederevo Trophy in 2013 was just another “kid-friendly” tournament, doomed to a local character, the “dream big” philosophy led to the tournament taking place on the shores at the end of August The Danube (21-25), grows into handball and sports frames and becomes an event of general importance for the city and the district, something that must be experienced.

The Smederevo Trophy has become a locomotive for the development of a local club, a motivation for the people around it and a tool for animation of local self-government that is firmly behind the project. A synergy where he gets his handball and everyone enjoys it. From the photos and videos from previous Trophies, you can feel it.

For the eighth consecutive year, you are organizing the Trophy in Smederevo. How could the following summer be different from the previous ones?

As for the competition itself, novelty is the category of young men’s senior teams. After consulting with our co-workers, as well as a personal introduction to the events, we came up with the idea to start competitions for guys between the ages of 18 and 22. The boys will have freedom in such a tournament, they will not be pressured by the result as well as their status in the first teams. There is interest in such a thing, it will be a nice competition – says Martic, adding:

We always strive to provide the best possible things for the participants. A city defile awaits us, an opening in a medieval fortress on the Danube, a concert, a foam party. We really do our best to keep the days in our city of Smederevo in indelible memory. It should be noted that for the first time at the opening we will have ambassadors from all countries participating in the Trophy, which is a huge honor for us.

The size and importance of the tournament exceeded the city of Smederevo, since from 2018 you are also using the capacities of Kovin and Pozarevac. Did you initially dream of it or see it as a reality, since Smederevo is not known as a handball environment.

The “trophy” came from imagination and love for handball. It’s really not a phrase. I have “infected” my team of people and since then we have literally complemented each other with various ideas, suggestions and plans. The tournament has built itself over the years, this year will surely come out of our city, and it remains to be seen how much we have improved infrastructure, so we already know that there will be four new courts in the center, which will make it easier for everyone to stay. in terms of coming and playing matches.

How many foreigners do you expect in the tournament and from which countries?

Our record was close to 160 teams from 18 countries, now we are on the figure of 800 reservations for accommodation. Given that it is the beginning of the year, it would be said that we will be attacking the record. In addition to our “brothers and sisters” from the countries of the region, we were accompanied by guests from Romania, Bulgaria, Greece, Hungary, Austria, Lithuania, Ukraine, Moldova, Belarus, Latvia, Estonia, Russia, Poland, Algiers, Tunisia, France, Great Britain, and even India. It is very possible that some other countries may join us, which would surprise us. We always look forward to returning guests, we are proud of the fact that one PSG is coming to us for the third year in a row.

What do you do to make Serbian guests unforgettable? What are their comments?

From conversations with guests, I realized that our immediacy and hospitality is what they like best. On the other hand, a high dose of professionalism in all segments is always praised by all participants and these are the parameters by which we stand out.

From tournament to tournament in Smederevo there is and operates a handball club. How much has the Trophy helped you and the club feel some benefits in terms of material, motivational and human resources?

From the moment of the trophy, the idea was to hear about RC Smederevo through the tournament. On the one hand, our children and fellow citizens come to their feet with friends from different countries, religions, societies, lifestyles. The multiculturalism of the “Trophy” is a great benefit for the whole society, especially we are glad that we manage to take our children to numerous tournaments through our acquaintances and cooperation with friends from all over the world of handball. So last summer we were in Portugal, this summer we will be in the “city of light” at the invitation of the world giant PSG. When we know that our handball school has 120 handball players, when we have all the teams in the years from 2002 to 2012, that last year we participated in national championships in all categories (2002,2004,2006), that the seniors entered the Super B league , we would say we have done a great job over the last couple of years. Our club was named the best sports collective in Smederevo last year, which speaks volumes about our way of functioning.

Where do you see the Trophy in a couple of years. Can existing capacities be exceeded?

In addition to the perfect team of people who work around the tournament, and knowing that the City pretty much takes care of a brand like “Trophy” I can safely say that I see it as stable and a very serious tournament for many years. A tournament that will bring us young people from all over the world year after year, and present our Serbia and Smederevo in the best possible way. And if we will be able to go beyond the limits, we will be pleased to check it from August 21 to 25 at the eighth Smederev Trophy. Of course, we also expect BH as a dear guest.

One of the best Serbian handball players, Kristina Liscevic, will be in the role of promoter of the eight Smederev Trophy.

As for the tournament promoter, I always look to be an authentic personality, a true handball enthusiast, a true “face”! Until now, this was done by Momir Ilic and Ratko Nikolic from the men’s team, as well as Marina Dmitrovic and Dragana Cvijic from the women’s national team. Ceca Kitic and Veselin Vujovic of former handball sizes … this time, our promoter will be Kristina Liscevic. A great athlete, the embodiment of a true handball lady, certainly an idol of many girls. We are especially proud of the fact that Kiki also became a part of the Trophy – says Martic.