‘Hispanos’ carry 4 points into the Main Round | Handball Planet 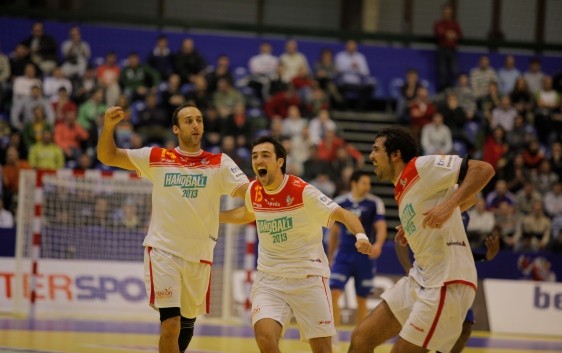 It was an enjoyable evening of good handball in the Group B as the teams say goodbye to Aalborg. The 2.932 fans in Gigantium arena witnessed a match of electrifying handball, with Spain coming away with amore comfortable difference than expected from the effort put in by Iceland.

It would be an understatement that the 5-goal difference at the end didn’t do justice to brave Iceland, but it was theconsistently impressive Spain that seized on their lapses in concentration during the second half, to set 33:28 in the end.
First half saw a great fight for the top spot in Group B from the very beginning; although played in a great sprit, with no suspensions, yellow cards nor penalties from either side in the first half.

At 6:5, Palmarsson matchedthe three goals from Macheda in the 8th minute, with an assist and two of his own.Jonssonleveled the score to 7:7 with 15 minutes in, only to squander it away with a yellow-card foul, providing Canellas the opportunity to score from a penalty.It was Canellas with a brace that made it 10:8, answered by Palmarsson who swiftly brought one back for his team. Excellent left-winger Sigurdsson (boasting 100% record throughout the match) followed by Palamrsson’s 3-goal individual series put Iceland two goals ahead at 13:15 with three minutes remaining.. After the time-out that followed after a turnover from Karasson, Iceland looked even more confused, as Spain quickly caught up on the deficit upon efforts from excellent Canellas.
It was only a question of whether there was enough time for Spain to go one goal ahead before half time.

An effort we might not see for time from Canellas brought Spain the lead, as HSV player scored an astonishing 9-meter throw goal, in virtually the last second of the first period. It was 16:15 for Spain at half time.

As the referee signaled the second half, Andreu continued the Spanish momentum in similar fashion, with a 6-meter goal assisted by Macheda.

It was a bold decision from AromKristjansson toreplace Gustavsson,having all 7 players in the attack with Sigurdsson wearing the goalkeeper’s bib,; as Rochas punished the flamboyance from the Iceland team with a fast-break goal; 18:16.Palmarsson, Sigurdsson (shooting 7/7 oveall) and Karasson caught Spain unprepared netting 3-0 series in 40th minute for 19:22.

Next even minutes marked the turn of the tide for Iceland as Spain mastered a 6-0 series to bring the score to three in their favor. Island conceded 8 goals in 8 minuteswhile leading, to let Spain get a hold of this game with less than 15 minutes to go, 25:22 being the score. Spain captain Victor Thomas netted his 5th of the game to remain the +3 with last 10 minutes to play. Olafsson brought one back for his team at 5 minutes to go, but Ugalde, Guardiola and Canellas (eventually the player of the match for his team with 8 goals, shooting 80% all night) seized on the one too-many technical errors made by the Icelanders in the second half; to see  Spainthrough to the Main Round in Herning, with a 33-28 win, and more importantly 4 points in the bag.

Both teams situated in Aalborg- a town in the north of Denmark, witnessed a real fight for the top-spot tonight, but it will soon fade from their memory, as they travel to Herning to meet the Group A participants in a battle for the semi-final.