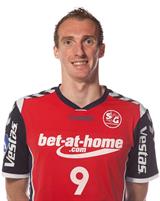 German star Holger Glandorf (30) secured his proffesional future with SG Flensburg until 2017. New contract on four year base is signed and that means that Ljubomir Vranjes doesn’t have to think about left-handed players for a while.

SG Flensburg has signed a deal with another left-hander, “Serbian Abalo”, Bogdan Radivojevic (20) who is coming from RK Partizan for the upcoming season.