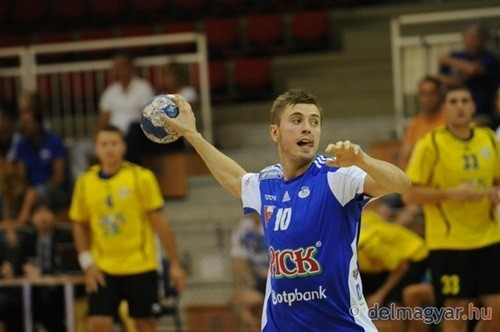 Three weeks before their annual super-match against Veszprém, Pick Szeged hosted last year’s bronze medalist Csurgó on Saturday. The guests strengthened their squad in the summer and were hoping to cause a major upset but instead they suffered a heavy defeat.

The first five minutes produced the only real excitement in the match as goals came quickly from both sides and Szeged were unable to gain a serious lead (5th minute 3-2). This all changed when Szeged’s brilliant playmaker Mindegia scored five times in 14 minutes and the difference slowly began to grow. But the man of the match in this period was clearly Roland Mikler who showed incredible skills and his saving percentage was well over 40%. By the end of the first half Szeged had already decided the fate of the match  and went to the locker room with a comfortable lead (Half-time 16-10).

In the first minutes of the second half things went from bad to worse for the guests as it took only a little more than six minutes for Pick to reach a 10-goal difference (37th minute 21-11). The score then got stuck at 23-15 for seven minutes. Tatai made sure the guests couldn’t  score but due to a long blackout in attack and several technical mistakes Pick players didn’t score either. Garcia Parrondo’s goal in the 50th minute (24-16) opened the final phase of the match. He was also the one who scored the best goal of the match after a fantastic assist from Mindegia. Vranjes’s goals concluded the match thus reaching the biggest difference.