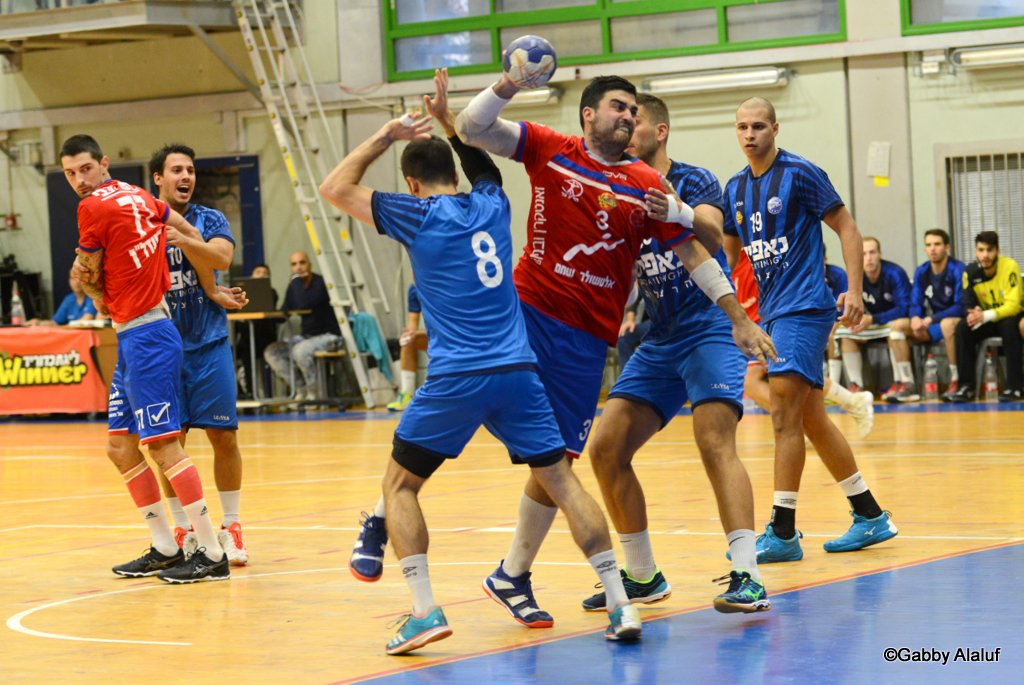 Share
Tweet
Share
Share
Email
Comments
Written by Dean Shmuel Elmas
The match between Maccabi Rishon LeZion and SGS Ramat Hasharon postponed because of Maccabi’s match on Saturday with Saint Raphael in the EHF Cup 3rd round.
Without this match, the most interesting match was between Bnei Herzliya and the champions and cup holders, Hapoel Rishon LeZion. The “Reds” started well with 0:3 after 2 minutes but Herzliya with a fabolous performance by the goalkeeper, Moti Angel, came back to 7:5 after 10 minutes.
Herzliya’s veteran middle back, Vladica Stojanovic, looked good and it was kind of head to head between him to Novak Boskovic that took Hapoel to 8:8 in the 17th minute. It was close until the end of the first half and 8 goals by Boskovic led Hapoel to 15:16 at the half time.
The Israeli national goalkeeper, Moshiko Elimelech, continued with his great shape and led Hapoel to 18:16 at the 36th minute. Bad attacking performance by Hapoel led Herzliya to easy fast breaks and the right wing, Sahar Shahak, scored for 20:20 in the 42nd minute. The match continued to be even while Shahak and the national middle back Yuval Gerera scored and assisted the most goals of each team.
The head coaches, Shlomo Hofman and Idan Maimon, took a timeout one after another in the 48th and 49th minute but the match stayed even with 25:25. In that moment, Vladica Stojanovic led his team-mates to 28:25 and Idan Maimon took his last time out in the 54th minute. Goals by Gerera, Boskovic and Guy Cohen took Hapoel back to 28:28 in the 57th minute.
Finally, the disappointing Savo Mester took his first shot in the match just in the 59th minute, Angel stopped, Dimitrievic scored and made it 31:29. The gap was too big to come back again and Herzliya won 32:31.
Scored for Bnei Herzliya: Vladica Stojanovic – 10, Vladimir Dimitrijevic -6, Sahar Shahak -5, Tomer Toueg and Guy Cordova -4, Yossi Appo -3
Scored for Hapoel Rishon LeZion: Novak Boskovic -13, Yuval Gerera and Guy Cohen -6, Nadav Nizri -3, Daniel Shkalim, Shay Natan and Oz Hamami -1.
The history came this week from the upcomers, H.C Beer Sheba, that got the first Winner League win in history with 26:24 on H.C Holon. It was the first match in Beer Sheba for the new Serbian left back, Stefan Ciric. In a relegation fight, Hapoel Kiryat Ono lost to Maccabi Kiryat Motkin 32:29 in away match. Ono’s head coach, Amir Dan have to find a new solution soon because they are just 2 points from the last place.
H.C Ness Ziona that looks like the most improved team this season, beat Hapoel Ramat Gan 31:25 and will meet the champions next week. In Rehovot, Hapoel Ashdod got another win, 28:24 on Ironi Rehovot.
Round 7:
Monday: SGS Ramat Hasharon – H.C Beer Sheba, Tuesday: H.C Holon – Ironi Rehovot, Hapoel Ramat Gan – Maccabi Rishon LeZion, Friday: Hapoel Ashdod – Maccabi Kiryat Motzkin, Hapoel Rishon LeZion – H.C Ness Ziona, Hapoel Kiryat Ono – Bnei Herzliya.
PHOTO CREDIT: Gabby Alaluf