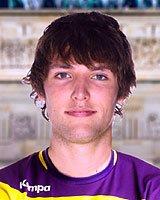 One of the biggest surprises of the German DKB Bundesliga, MT Melsungen has announced signing contract with young domestic star, right wing, Johannes Sellin (22), who is coming from Fuchse Berlin. Left handed player is one of the member of golden junior’s squad who won the gold medal at Junior World Championship in Greece 2011. He signed two years contract with MT Melsungen – team who will radically change roster for the upcoming seasons.