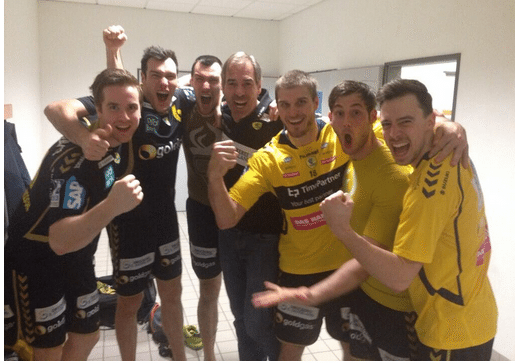 The third team from the last VELUX EHF F4, Polish Vive Targi Kielce finished European season at TOP 16 phase this season! Rhein Neckar Lowen beat Dujshebaev’s squad 27:23 (16:14) in the second match of the most interesting TOP 16 and came to the chance to fight for the second F4 in their history (first was in 2011).

After the second match between Rhein-Neckar Löwen and Vive Targi Kielce, it is the German team that has qualified to the quarter final of the Champions League. Polish champions arrived in Mannheim having 4-goal advantage from the first leg and they could allow themselves even to lose by 3 goals which, bearing in mind the course of the first match, did not seem to be a hard thing to achieve. The beginning of the game was not the best for both teams as they did not manage to score any goals. They got quite a lot cautions and suspensions instead – the first one to rest on the bench for 2 minutes was Nikola Manojlović, who was punished already in the first minute. The spectators had to wait 4 minutes to see the very first goal of the match by Michał Jurecki. Guests were in the lead, however it did not last for long as in the 10. minute Löwen took the upper hand and got away by 2 goals (5:3). Kielce did not resemble the team which played a week before, their defence was far from good and they were unable to make the most of their many chances. The one who made it hard for the Polish team was Niklas Landin who also did not resemble himself from the match in Kielce, and kept saving even the most convenient chances of his opponents. Before the half time Vive managed to equalize (at 10:10 and 12:12), but they wasted it and Löwen left the court being away by 2 goals (16:14).

The beginning of the second half was excellent for the hosts and terrible for their rival. Kielce lost 3 goals in a row and that meant they lost their whole advantage gained at home. One might say this was the moment when the match was decided. Kielce still had problems with Löwen’s very good defence, and could not find a way to stop the German team from hitting their net. In the last 10 minutes they managed to reduce the gap to 3 goals, there were backed by Sławomir Szmal saves; they had their chances to forge ahead but they wasted it again. Löwen kept the sufficient advantage until the end and after winning 27:23, they are in the next phase of CL.