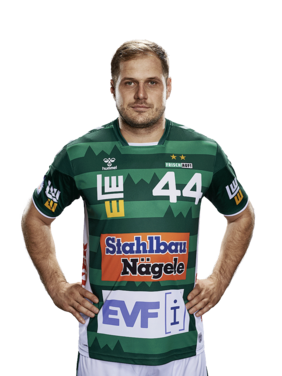 The Croatian international line-player Kresimir Kozina has now signed a new contract with Frisch Auf Goppingen that runs until summer 2024.

He got into professional handball at RK Zamet Rijeka and RK Nexe Nasice in Croatia. From 2013 to 2015 he played at HC Alpla Hard, where he was two-time Austrian champion and one cup winner. In October 2015, he switched to SG Flensburg / Handewitt. Both there and in the following season at Füchsen Berlin, he replaced long-term injured players so well that he developed into one of the best runners in the league.

Kresimir Kozina is 1.96 m tall, has played numerous international matches for Croatia and, in addition to his outstanding qualities in attack, is also versatile in defense. In 2016 he was a regular member of the national team who won EHF EURO 2016 bronze medal and played at Olympic Games in Rio.

The sporting director of FRISCH AUF! Christian Schöne says about the contract extension: “I am very happy that Kresimir Kozina has chosen FRISCH AUF! Again. He is a top performer in our team and an extremely important component in our future planning. This contract extension is a groundbreaking decision for the club because “Kreso” is of great importance in defense, attack and for the emotional mood in the team “.