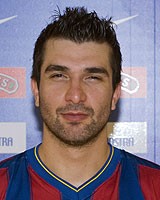 The Chilean national team received bad news after Marco Oneto‘s injury meant that he will be out for at least a month. With the left-leg injury taken during a training session, Oneto won’t be able to play at the World Championship that starts in about 15 days. This is going to be a serious blow to the team that hoped for a victory at the Championship. Oneto is currently playing for MKB Veszprem.

Chile plays in a group against Denmark, Iceland, Qatar, Russia and Macedonia. Games are to be played in the city of Sevilla.