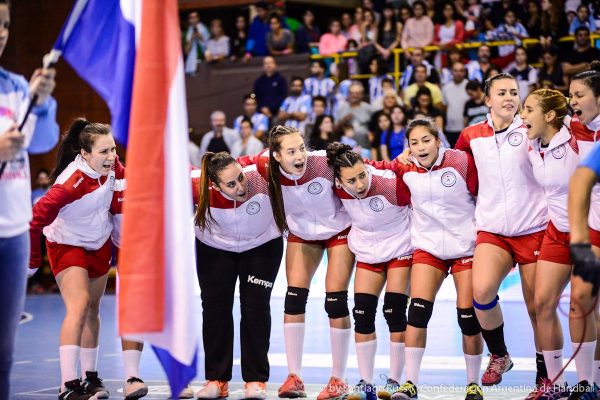 Paraguay defeated Uruguay 22-24 and took the last spot available for Germany 2017. With this win they also conquered the third place in the Pan American Championship in Buenos Aires, which was their first medal ever in a continental tournament.

There was too much at stake yesterday in the stadium of SAG Villa Ballester in Buenos Aires. Besides the third place in the Pan American Championship, a ticket for Germany 2017 was the bigger prize and after five matches, it all came down to Paraguay and Uruguay, who had lost their respective semifinals matches against Argentina and Brazil.

The first half saw both teams with great fighting spirit and the match was tied after the first 15 minutes, but from then on, it looked like the anxiety had taken over the Uruguayan team. Their attacks were too precipitate and lasted too little against a very mobile defence. The team conducted by Neri Rubén Vera took the lead and finished the first half winning 13-15.

The second period was the breaking point of the match, the Paraguayans, lead by their centre back Marizza Faria, were able to extend the gap up to five goals. But the team coached by Silvana Renóm did not give up and chased after Paraguay until the last moments of the match; in fact with nearly a minute left of the match the they were only one goal away, but the opponents were able to score one last time to determine the final difference.

Paraguay will be back in a World Championship after 4 years, as their last participation was in Serbia 2013. Team captain and best center back of the tournament, Faria, expressed her happiness after the match: “This is an incredible feeling. I feel very blessed. I’m still here in the national team, I’m kind of like everyone’s mom here and I’m very proud of my team, of these girls who have a lot of guts, and I’m very happy”.

The 33 year old who plays for Spain’s Mavi Nuevas Tecnologías did not hide a bit of sadness for the defeat in the semifinals, but confessed her satisfaction upon the qualification for Germany 2017: “It was tough to recover from yesterday’s semifinal because we thought we could damage them (Argentina) a little bit more, but we had another chance today and we took it. The president of our federation said that if we would qualify we’d receive a lot of help, as you know handball in Paraguay is not professional, so now we have to enjoy this moment, but I think from from now on things will be looking up for us”. Faria added that “we knew we had to go match by match, and today on the last day we still had this goal (qualifying for the World Championship) in our minds and we conquered with a lot of sacrifice and it’s very nice to be in a team with such young girls who are triumphing, I think handball in Paraguay has a lot of future and lots of doors will open for us form now on”.

Besides from Marízza Faria, who was part of the all-star team of the tournament, Sabrina Fiore Canata finished as top scorer of the tournament with 34 goals. The top scorer, who also expressed her joy: “This is an unbelievable feeling, it’s a huge happiness and a great reward for all of us for the work were doing. This qualification is a sum of lots of things. of a mix of young and experienced players who were able to play together as one team and who were able to reach the goal”.

Paraguay will enjoy their third World Championship, the previous being France 2007 and Serbia 2013. They are in pot 6 for the draw along with Cameroon, Tunisia and Poland, who received the wild card of the tournament.