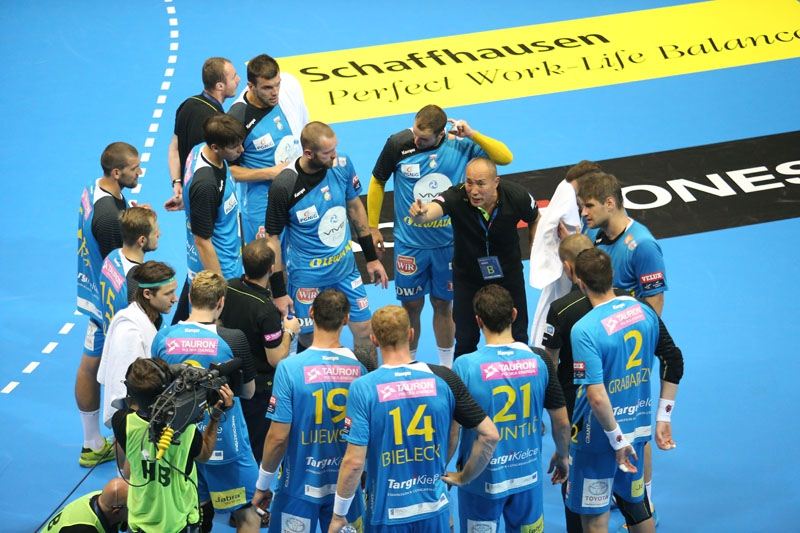 Polish Vive Targi Kielce are on the way of defending the crown in the domestic Championship. Talant Dujshebaev boys won the second match against Wisla Plock 25:16 staying only a step to the end of series…

The first match of the Polish championship final was won by Vive Tauron Kielce. Kielce team beat at home Orlen Wisła Płock 31:26. However, for the first 45 minutes more or less, it looked that – even without a couple of players – weakened Wisła is able to win the game. On the other hand, Kielce played very badly – the amount of mistakes was unbelievable. Even when they manage to steal the ball due to the good defending, they couldn’t hit the net. The terrifically playing Corrales kepy denying Kielce players ball after ball. He saved among other things a couple of fastbreak attempts. On the other side of the court Sławomir Szmal also was performing well and was one of the best players of his team. For almost whole first half Płock was on the lead while Kielce only managed to equalize a few times.

But eventually, Polish champions made use of Wisła’s mistakes, took their first lead in 28. Minute, and left the court leading by two (13:11). In the second half the goalkeepers still had some say in the game, which still was quite tight by the way. The mistakes on both sides also had some say. Kielce couldn’t figure out how to stop Syprzak while Płock kept wasting their chances such as penalty throws or rebounds.

Crucial time arrived 10 minutes before the final whistle – Kielce got 4 goals ahead (25:21) and didn’t lose it until the very end. They even were given a chance for one more penalty throw after Corrales fouled running Jachlewski outside 6 meter area one second before the final whistle. Wisła’s goalkeeper was given a red card and Aginagalde scored a penalty goal making the final result 31:26.