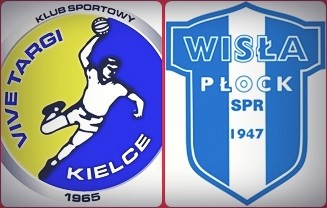 First match of the Holy War between Vive Kielce and Wisła Płock goes to Kielce. Polish champions won at home 34:27 and right now are closer to defend the title. The beginning of the match was not demonstration of great handball – players of both teams made a lot of mistakes. Although it was a team from Płock that did better and took the lead; in fact, they were leading for almost 20 minutes and then “Iskra” took their first lead. There was a lot of fight in the first half; referees were giving away suspension after suspension – some of them might have been found disputable. Kielce managed to gain a 3 goal advantage before the half time. In the second half Wisła was close to draw a couple of times but hosts broke away and eventually won by 7 goals. It was a good game for both goalkeepers Sławomir Szmal and Marin Šego who helped their teams many times, sometimes in a quite spectacular way. The top scorer for Kielce was Ivan Čupić (8); Wisła’s top scorer was Michał Kubisztal (6). The second match is going to take place on Sunday, also in Kielce.