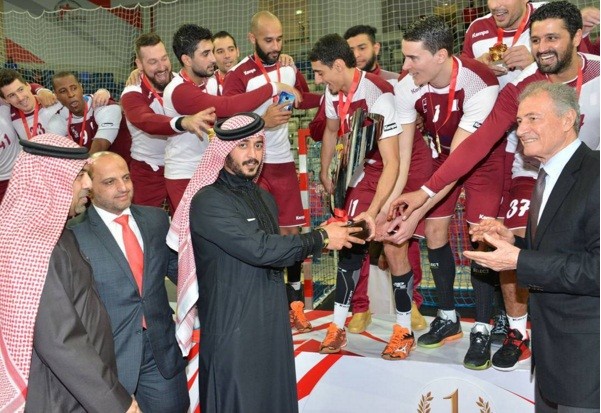 The match, which was replay of 2014 final, was very close and challenging. Strong efforts of Bahrain, with disciplined defense and inspired attacking play of Mahmood Abdulbaqer, kept them in the game. During first 50 minutes neither Qatar nor Bahrain managed to make more than two goals difference. Despite outstanding support from the crowded Khalifa Sports City Hall, Fernando Barbeito side did not capitalize crucial advantages and chances and paid the price at the end. In the second half, at 16:16 result, Qatar played with only three players in the field for two minutes, due to mistake of Valero Rivera bench. However, Bahrain was unable to score more than once during that period. In the last quarter, Qatar, boosted by outstanding saves of Goran Stojanovic, strong offensive play of Zarko Markovic and furious finish by Rafael Capote, who scored five goals in last ten minutes, managed to win over highly motivated hosts.

In the third-place match, Japan easily won 25:16 (12:7) against Saudi Arabia, which missed some key players due to injuries.