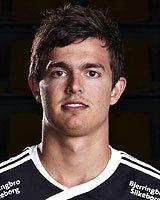 THW Kiel has a pick on generation 1991. After Tunisian youngstar Wael Jallouz has signed deal with “Zebras”, another player of that generation will take t-shirt of the best team in the World. That is Danish left back / playmaker, Rasmus Lauge (21) from BSV Silkeborg. Despite his age, Lauge has huge international experience. His debut for Danish NT was at WCH 2011 in Sweden. Since then he won European gold and World’s silver medal.

Negotiations between Danish and German team are in the last stage. THW Kiel will leave Daniel Narcisse next summer in direction PSG, while next destination of Momir Ilic is still unknown. Serbian top gun is on the end of the contract….