RASMUS LAUGE SCHMIDT FOR HP: "I feel big pressure - That is why I play in Kiel" | Handball Planet 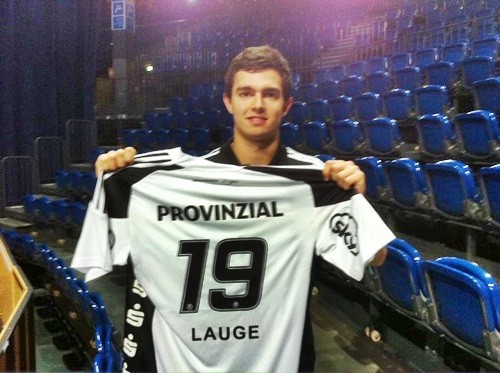 One of the most talented players worldwide Rasmus Lauge Schmidt (22) took the great responsibility by signing contract with the German champion and one of the greatest handball teams in the world – THW Kiel. Danish youngstar still finding himself in the new “Zebras” system. He talked for Handball-Planet.com after the match in Plock where THW Kiel beat Wisla 34:33 with the last second goal by Filip Jicha…

You’ve joined THW Kiel this year, how do you feel in the team and what are your expectations for this season?

– We have started good I can tell for sure. I am very excited about the team, we have good team but unfortunately we have a lot of injuries and illnesses. That is very difficult, because Christian Zeitz stayed home, he is ill. I don’t feel good as well, I have problems with my shoulder and Aron Palmarsson has pain in his knee. It is difficult for us but we took two points and that is the most important.

THW Kiel started this season good, you won everything but most of the victories was in the last minutes or seconds…

– It is enough to win by one goal, I can tell you. It is not good enough but we had difficulties with players and injuries but that is no excuse. We make it anyway, we won two points and that is the most important. I think when we will have full recover it will be different.

You are a young player and sometimes you have to take all game on your shoulders, don’t you feel a big pressure, playing in so big team as THW Kiel?

– Yes, of course there is a big pressure but I got used to it. That is also why I make decision to join Kiel. There is high expectations and I have the highest expectations for myself. I am not going anywhere, I don’t think so. The best part of being here is that we know that we can win every match.

– I think they are going to win a lot of matches here, at home. It is incredible atmosphere and they have a good team with lot of experienced and young players as well. We won here, we did what we could and that was the most important, but for sure they can play with every team and win at home, where is hard to play for guest in such an atmosphere.

Which teams will qualify for the TOP 16?

– It is difficult to say something about the rest of the group. I don’t know much about Porto and they are some kind of outsider, many people expect them to be under the line. Other five teams are really close to themselves. Dunkerque played very well in French league but this is theirs first time in Champions League and that is always hard for them. Kielce has very good team with Aguinagalde right now, so it is also quite strong team. I hope we will manage to win most of the games and hopefully win the group – concluded Rasmus for Handball-Planet.com.