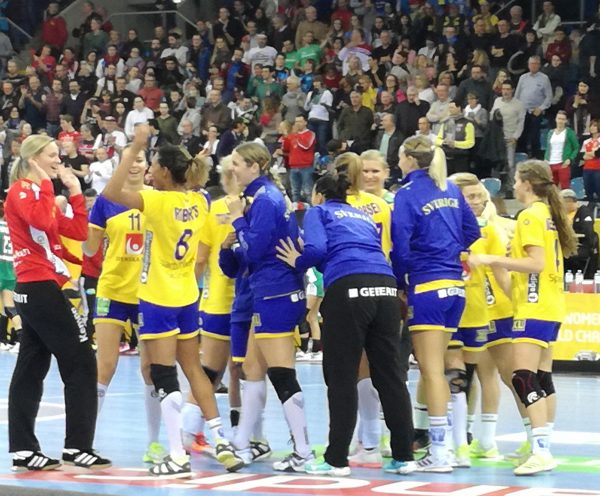 Both Swedish and Hungarians reached the second day of competition in group B in Beitigheim with a defeat on their backs. It was a chance to win the first two points and the Scandinavians did it best in the end and collected their first two points after a 22-25 win. On the last match of the day, Norway took their second victory after a clear victory against Argentina by 21-36.

It was a tight match from beginning to end but Sweden didn’t let Hungary take control of the match. Whenever the conducted by Kim Rasmussen scored, the Scandinavians replied back with the fastbreaks. The goal difference was never higher than two goals on the first 30 minutes. In the meantime, the goalkeepers from both sides were showing off with key saves. Hungary had some trouble controlling the fast paced attack from the Swedish, despite Branka Biro’s great afternoon.

Kinga Klivinyi was one of the keys on the Hungarian attack on the first minutes, as she punished from the 9 and 6 meters line, it was 6-4 for her side after 13 minutes, but on the other side, Jamina Roberts helped Sweden back scored twice to tied the match. In the minutes to come, they the team coached by Henrik Signell took the lead by two goals (7-9, 23’), but, despite having to face two 2’ suspensions, Hungary fought back and tied the match for a final 11-11 at the end of the first period.

On the second half Hungary scored first, though Noemi Hafrá, but it was quicky replied by Nathalie Hagman though a fastbreak. Then three unanswered goals from Isabelle Gulldén and Jamina Roberts gave Sweden the partial 12-15 lead. That advantage was well administrated by the Swedish who even extended it to +4 (15-19, at 45’). The Hungarian side tried to get back on track, and they were 2 goals behind in 5 opportunities in the last 15’, but they could never make it a shorter gap, mainly thanks to an outstanding Johanna Bundsen under the posts (MVP of the match, 40% saves). In the end it was a 22-25 victory for the girls in yellow.

“We played pretty smart, we set the tactics before the game and we followed them, and we played a defense than yesterday, so maybe patience mixed with the things I mentioned were key for today’s victory. I was a little afraid when we only had only had two or three goals advantage, and they started to score from the left wing, but we managed to close the game”, expressed Jamina Roberts after the match. Regarding Sweden’s next rival, she confessed: “It will be a hard game. Maybe I didn’t expect that Czech Republic would beat Poland, so it will be a tough game and we need to prepare it just like we did with this one”.

The conducted by Icelandic Thorir Hergeirsson obtained their second victory in the World Championship, this time against the weakest rival of the group, and the only non-European team, Argentina. The South Americans fought hard on the first half and had the lead after the first 10 minutes (6-5), but it was not too long until the current title holders took over the match. After 6 unanswered goals for the following 8 minutes, Norway took the lead and never let go of it. The first period saw a very focused Argentinian team, who finished the first half only 5 goals behind: 13-18.

On the second half, the Scandinavians netted 5 consecutive times in the first 5 minutes and produced a 10 goal gap that was unreachable for the team coached by Eduardo Peruchena, who also took the opportunity to put on court some of the younger players. Norway scored the same amount of goals on the second period, while Argentina was able to go past Katrine Lunde only 8 times. With 7 goals (out of 7 shots) Heidi Løke was the top scorer of the match and was named MVP.

“They (Argentina) are developing and they played very well on the first half. On the second half we were a little more pleased, we wanted to keep them under 20 goals, but we didn’t manage to do it, we tried to stop them on the first half but they played really good. We had better focus on the second half and I’m pleased with the performance of the team and the players”, expressed Thorir Hergeirsson after the match.

On the other side of the table in the press conference room, Eduardo Peruchena said: “For us it’s an honor to play against them and to learn from them. We made a really first good half, but on the second we did not start well. For us to score more than 20 goals against European teams is a goal and we made it in both of our games. So our next goal will be to stay as close as possible in the scoreboard aginst our rival to reach the final minutes with more chances and maybe try and beat them”.

Round 3 in group B in Bietigheim will be played on Tuesday, as follows: