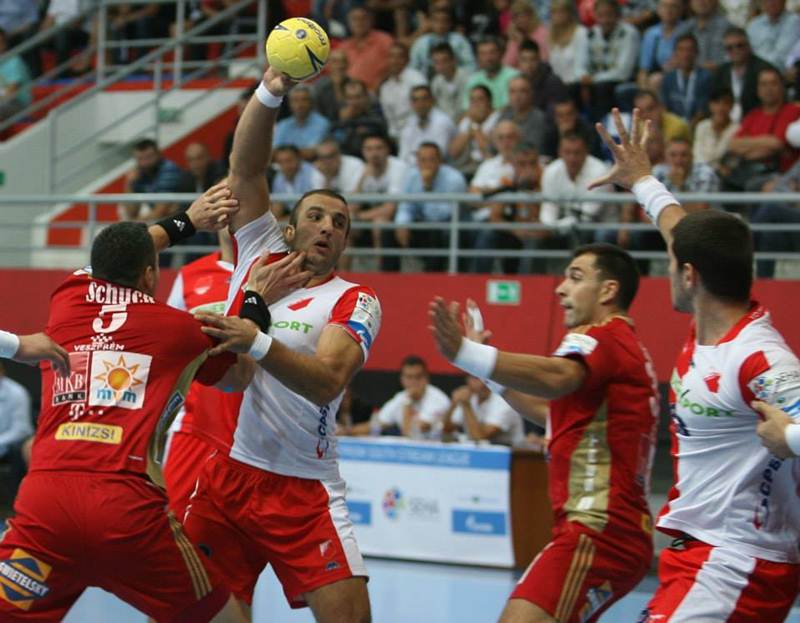 Hungarian TOP team MVM MKB Veszprem proved the role of the favorite in their first match at SEHA GAZPROM South Stream League. The fourth team of the VELUX EHF Champions League last season, beat the best Serbian team RK Vojvodina 32:19 (13:9) on their debut in regional competition and did some warm-up before the Hungarian Super Cup clash with PICK Szeged next weekend. The best Serbian squad showed the fighting spirit from the very beginning of the match and was in the game after first 10 minutes (4:4).

The first sign of Hungarian quality came during the middle part of the first half, when Vojvodina’s coach Djordje Cirkovic had to take time-out after 3:0 series of the rival.

That wasn’t too helpful due fantastic defense which help Hungarian goalie Roland Mikler to save own net. Veszprem had +5 in 21st minute (10:5) of the match, but Vojvodina made the balance in the last minutes of the first half with the goals of Orbovic and Nikolic (9:13).

Veszprem finally broke the resistance of home team at the start of the second half, when Laszlo Nagy scored two goals in a row for +7 – 9:16 (34.) Everything became the question of routine until the final whistle. Fans in „Slana Bara“ hall had a chance to see series of Momir Ilic goals from the 7 meter line (he was TOP scorer of the match with 11 goals, 9 from 7 meters).

Veszprem reached +10 in 43th minute (12:22), Vojvodina fought back with 3:0 series, but their resistance collapsed at the end. Hungarians have finished match with 4:0 series

– We took the role of the favorite on this match and played the best we can in this moment. Vojvodina have quality squad and they need time to catch the form. I am sure that we will see better performance of this team in the future.

. This was tough game, but we were lucky to got all the informations about Serbian squad on time and prepare well. We had a lot of problems with defense in the first half, but we solved that in second part…

– Veszprem came into the game as a favorite and they showed why. I am glad that we play with this level of the team at the start of the season, to see, how much we have to work to get better.

– We have 10 new players and this was new experience for us. Veszprem is one of the best European teams. It need time for the miracle. My boys fight from the start until the end. I cant say anything against their performance.