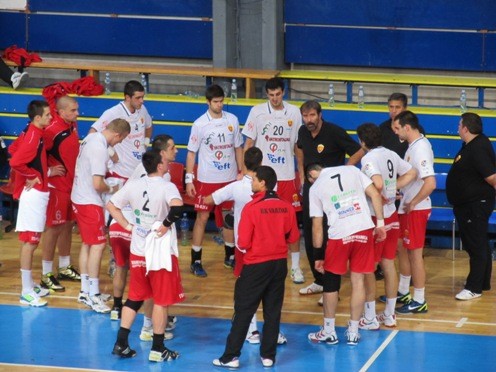 The big derby in the SEHA regional league between Vardar and Metalurg brought very exciting finish, however the beginning of the game did not announce that. Vardar took the lead early and kept making bigger and bigger, Metalurg’s only bright spot being Vugrinec who practically fought Vardar alone. Half time score was 17:14 for the hosts. In the second half, even worse beginning for Metalurg, only one goal in 10 minutes, and Vardar has 6 goals lead after 10 minutes. Lino Cervar tried different tactics, and it only started working in the final 15 minutes. Metalurg continued getting closer and closer, and this meant very exciting finish. Through Goce Georgievski, Metalurg make it 26:26, and Vardar has the last attack. Vardar try to keep the ball until the end, and without making any shot, they are getting 9 meters, and time is over. Pribak takes the 9 meters, and over the hands of 6 Metalurg players and Mitrevski, scores a goal, Vardar wins 27:26. Markovic led Vardar with 10 goals.

Naumce Mojsovski missed this game due to injury, but Metalurg had to cope without the services of Darko Stanic early in the match. In a counter-attack of Vardar, Stanic ran to try to take the ball before it reaches Markovic, and incidentally his foot caught the one of Markovic, after which Markovic fell, and the Slovakian referees called a red card for Stanic.