Simonet and Ilyes: "We can be happy with the draw" | Handball Planet 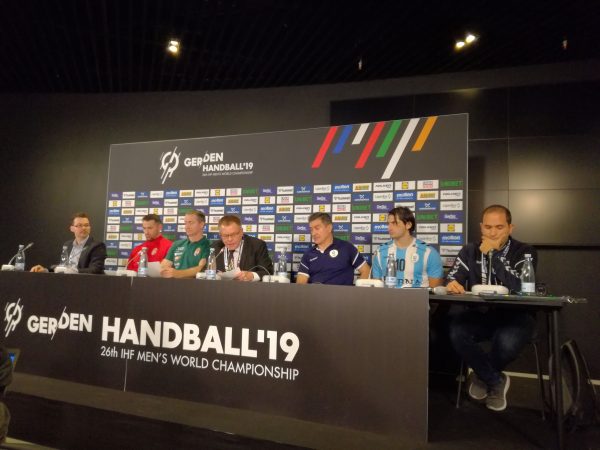 Reactions after the game between Argentina and Hungary showed that although none of the teams got the victory, they were content with getting a first point in the competition.

István Csoknyai, coach of Hungary: “The first match is very tough for everybody and it was very difficult against Argentina, because they play very fast handball, and today we didn’t play so bad, but without easy goals, without goals from fast break and from the wings, so it was a big problem for us tonight. But it’s a good result for us…OK, we hoped to win tonight, but this is sport, this is life, tomorrow it’ll be a new day, we’ll watch videos and the next match we’ll try to play better”.

Ferenc Ilyes (HUN): “I think people could’ve thought that Hungary would win today, but we, the players and the whole team knew that we’d have a very hard game today, and it came true, and in the end, we finished with the draw. Looking at the last ten minutes we can say we can be happy with this draw, but for us, the World Championship has just started, we have lots of games in front of us and I’m sure we can move through from the group phase”.

Pablo Simonet, MVP of the match (ARG): “On the last two attacks we did things that were not exactly what we had trained, thought we could make it work and tried to surprise them, but we couldn’t, but I think we did a great job, particularly in defense, so we’re very happy. But it’s a bittersweet feeling right now, we thought we could take the two points, but it is what it is. This is how we’ll learn, we have 7 debutants in World Championships, so we can use all of this experience and take it with us to the upcoming matches, which will be hard as well”.

Manuel Crivelli (ARG): “We leave with very good feelings, really. If you’d ask me before the beginning of the championship, of course I would’ve ‘settled’ with a draw, but the way things were in the end makes us feel we could’ve taken the win as well. But of course, Hungary and Sweden are the main contenders for the leadership of the group, so getting points from them is of course very important”.

On what set them apart from the victory: “We started off really bad, we couldn’t score and it was hard because then you have to catch up, but we did it; so I think in the end we missed some sharpness to get that last ball in, but all in all it was a great match. We have a positive feeling, of course right now it’s a bit awkward because we know we could’ve won, but if we make a balance, of course this point is very positive for us”.

Regarding his debut in an official tournament with the national team, Crivelli stated: “I feel very good, getting a result like this on my debut, and having that many minutes of course is great, I was not really expecting it and I’m very happy about it”.