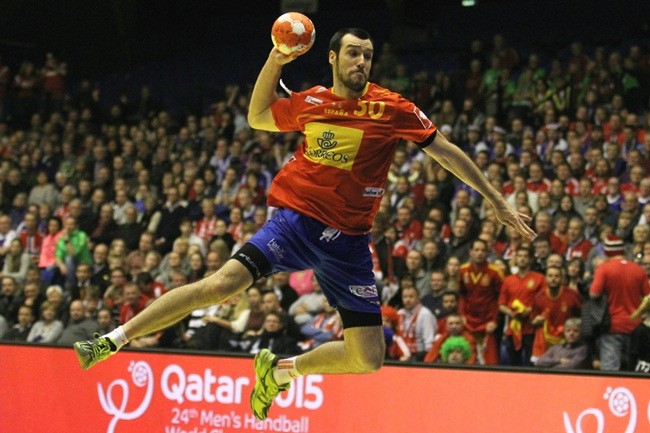 ManoloCadenas’ men insured there was nodeja vu of the 2012 Euro 3rd place match. Joan Canellaswho scored 8 goals tonight, paired with the goalkeeper Sierra who found his form tonight upon his merely average tournament to secure the Spanish celebration in Jyske Bank Boxen today. The bronze medal match came after a turbulent semifinal, which was married with harsh words and controversy mainly from the Croatian camp. Regardless of that, the team selected by SlavkoGoluža, who was previously devastated with the loss against Denmark, came to the Jyske Bank Boxen well focused and determined to give the World champions a run for their money. It was Spain who got the victory in the end 28-29 after an excellent performance from their key players. Despite Croatia showing a noticeable improvement in the secondhalf(15-13) after being 3 goals down at the interval(13-16),Duvnjak’s eight goals weren’t enough to stop the Spanish armada from winning their second European championship bronze medal in history.

The fist half saw an equal contest between the two teams, as it was 7:7 mid-way through. It was a lackluster day for an otherwise very solid tandem of Croatian goalkeepers Alilović(3/12) and Losert(10/30) were subbed back and forth with no effect to their performance; Canellas was unmistakable from penalty with 4/4 in the first half to ad to their demise. Besides Duvnjak who played consistently throughout, the only shining example for the Croats was the right-back Buntić who was 4/4 from the field in the first half. Duvnjak who was 3/6 in the first half, followed byHorvat, gave a lifeline to the Croatian team as the duo drew level at 12:12 five minutes until the half time, but it was short-lived as Canellas and Aguinagalde brought the score to 12:16 upon a 4:0 run, before the youngster Slišković made it 13:16, the half-time score with three goals to catch for the defending bronze medalists.

The beginning of the second period saw Duvnjakkept like a prized possesion by the Spanish defense, as Čupić lead Croatia into one-goal deficit in the first five minutes. Spain seem to be adding the throttle whenever they needed to, as mid-way through the second half Spain got a 3-goal lead with an effort from Aguinagalde, upon a string of excellent saves, from previously in the tournament less than impressive Sierra who found his form and motivation for this match, 20:23. Croatia came within one after Losert saved a truly awful effort from Maqueda. Kopljar was clumsy in the fast break, loosing the ball thus granting Sarmiento a chance to score from the breakthrough. Spain is leading by two, 23:25 as we enter the last ten minutes of the game.Aguinagalde increased the lead to 23:26; by the time Croatia couldn’t find their way past the goal kept by Sierra who was well beyond his first-half success rate.

After Duvnjak decreased the difference to only one goal, five minutes until the final whistle;Losert was 9/25 successful in stopping Spanish shots,saving two in a row from Entrerios and Sarmiento, bith into the bottom left, with 26:27 the score. Saves from Losert marked the three minute goalless period married by turnovers at both sides of the pitch.  Last two minutes of the match it was Duvnjak against Spain as the World’s best player was the only thing keeping Croatia in this game. Duvnjak quickly responded to Aguinagalde’s goal to make it 27:28 in the last minute of the match but it was Pyrrhic victory for the amazing Croat, as he will finish the match on the bench being suspended after trying to cover for the defensive mistake from Vori.Canellas set 27:29 as the last minute progressed, but Sliškovićfailed to bring Croatia back within a chance by hitting the post. The experienced Igor Vori scored the last goal of the game, seconds after the miss from Slišković, but surely too late for Croatia as Spain were looking at the clock asking for a time-out in the very last seconds with the score remaining at 28:29, and Spain celebrating their Bronze medal all over the court like it’s gold.