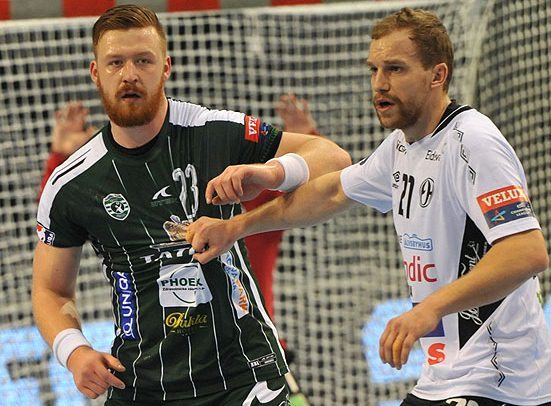 In the 4th round of Group C in the Champions League TATRAN Presov lost to Elverum Handball 25:27. The Slovakian champions played a tied game with Norwegians champions in the first half. In 27th minute the away team took three-goal lead 16:13, mainly thanks to their right wing Tamas Ivancsik who scored 7 goals. TATRAN finally managed to reduce half time goal difference to a single goal – 16:17.

In the second half the spectators in TATRAN Handball Arena could see an equal match once again. Eleverum were 20:18 in lead in 38th minute after the goal of their best player and playmaker Josef Pujol.  Within next six minutes TATRAN manage to take one goal lead 22:21. In 51st minute the home team extended their close lead to 25:23 after Viacheslav Sadovyi scored. However, TATRAN did not manage the end of the game at all. They were not able to add a single goal in last ten minutes of the match despite having a power play advantage. On the other side Elverum managed to score four more goals and reach an important Champions League away win 27:25.

“I would like to congratulate to Elverum on their deserved victory. They were also luckier in the final phase of the game. Unfortunately we missed a lot of chances to score easy empty net goals. It was one of the factors which decided the game. We did not have a good day today. We did not play well. We could have won the match, but I have to admit Elverum were better today.”

Radovan Pekar, left back of TATRAN:

“We did not start the game well in defence. It was a big pity we did not manage to take the lead in the first half. In the second half we had a great chance to win the game leading 25:23, but we lost it because of easy mistakes we made. We should certainly have played better against the rivals that play power play with 7 players without goalkeeper. We missed our spark today. This is why our performance was worse compared to Elverum. I hope we will win away in Elverum.”

“We knew it would be a tough game. I do not know how many times we have beaten ourselves like that. We have to stop it because in the following games we desperately need to take the points. I congratulate to Elverum on their deserved win.”

Jakub Hrstka, left wing of TATRAN (the best scorer of the game with 8 goals):

“It was an equal game anyway. Today we could have beaten Elverum at home. We did not manage the first half time as we wanted and lost it by a single goal. In the second half we took the lead and controlled the game, when we led by two goals 10 minutes to go. Then we did not convert 100% chances and made several easy technical mistakes. Elverum used that and finally managed to win the match.”

“It was really close match of two equal teams today. It was a big win for us because we won an away game in the Champions League. In the end both teams could have won this game. We had some players who were able to do those small important things in the last few minutes of the match. We had these match winners, so I am really happy today. I am really proud of our team that we managed to win in Presov without our national team line player Overby who was injured.”

Josef Pujol, centre back of Elverum:

“It was a tied game that could have ended both ways. We had good tactics before the game, which we followed during the match perfectly. Even though we got into the troubles allowing some empty net goals in the 2nd half, we still believed in our tactics and in the end we managed to win.”

After the 4th round of the group phase of the Champions League TATRAN Presov are the bottom of Group C with 2 points. In the 5th round Slovakian champions host Russian champions Chekhovskie Medvedi. The game is scheduled for Saturday 22 October 2016 at 16:00 CET in TATRAN Handball Arena, Presov, Slovakia.