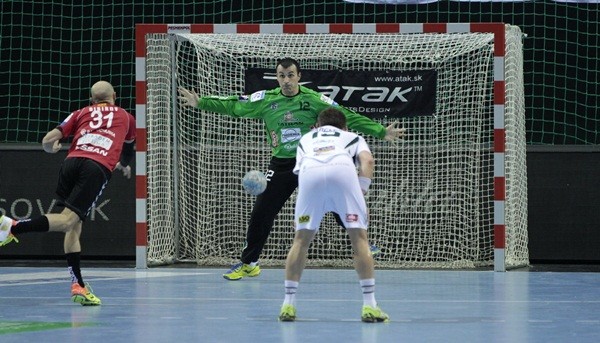 Slovakian Tatran Presov have finished the regular part of the season at SEHA GAZPROM South Stream League at the first place. Goalkeeper Svetislav Verkic stronly believes that his team have chances to win the SEHA F4 in Novi Sad next weekend:

– I am more than satisfied with our final score in SEHA this season. We’ve had some failures like the one against NEXE in Osijek, but on the other side we’ve played some fantastic matches in Skopje against Metalurg and Vardar, but also in Belarus against Meshkov – said Verkic and commented semi-final rival – Brest Meshkov:

– Personally, I wanted them in semis. We love to play against them and I believe we can reach final over them. I think that we can win SEHA GSS this season. Vardar did that in Zagreb, then Zagreb made the same in Skopje, so it’s time for us. We have shown that we can play against all the rivals, doesn’t matter about the name and quality. Some small things will be decisive, as daily form and motivation.

Serbian goalkeeper began his proffesional career in Novi Sad, where he played for Vojvodina, but also won Challenge Cup in 2001 with team from the suburb – Jugovic Kac.

– Trophy in Novi Sad would be a crown of this season. I have a huge motivation to play at home in front of home fans. Handball fans from Novi Sad know handball very well. I hope that they will recognize importance of SEHA F4 event and come to watch the best regional handball. Our goals in Slovakia are very clear. We want “double crown”. Club’s leaders are satisfied with our results in SEHA. We, on the other hand, don’t have too much chances to progress further in EHF Cup – concluded Verkic.