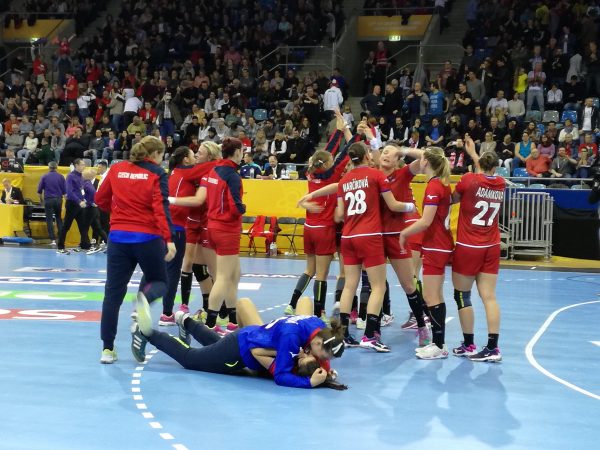 Czech Republic overcomes a troublesome first half and obtains a well worked victory for 25-29 against powerful Poland. At the beginning of day 3 in this World Championship, they are leaders in group B with 4 points.

It started off well for the team coached by Leszek Krowicki. The Polish had once again began with the right foot and dominated the match with a fluent attack and a solid defense. But the Czech did not back down and after a 4 goal deficit, they reduced the gap to one (9-8 at 21’). However, by the time the teams went to the locker room, Poland was leading 15-12.

The second half was as exciting as this sport can get. After 10 minutes, the Polish extended the lead to 4, but then the Czech reaction started. In a 4-0 raid, the conducted by Jan Basny tied the match and forced Krowicki to as for their second team timeout. The Polish took the lead again, but they looked more anxious than their oponents, who worked patiently every defense.

Iveta Luzumova and Marketa Jerabkova scored to put Czech Republic 20-21 on the scoreboard and from then on after 18 minutes of the second half, and from then on, they held tight to that advantage. The Polish team rushed to get back, and they put pressure on the Czech captain Luzumova on the attacks, but they were unable to stop the now vivid attack from  their oponents. Two goals with the empty goal sentenced the match moments before the final whistle.

“I cannot believe it, I’m really happy. Out team worked really hard for this win and I have no words”, stated Iveta Luzumova after the victory, and continued: “before the match we said that we had to be patient, because yesterday they played a really tough game against Sweden, and we said that we should run in the second half because they would be tired, so that was our key. Before the championship we said that we should beat Argentina and try to beat Poland, we reached both goals and now we can look forward to the other matches”.

With this result, Czech Republic adds two points and sits at the top of the table in group B. Later today, Hungary will meet Sweden and Argentina will face Norway.