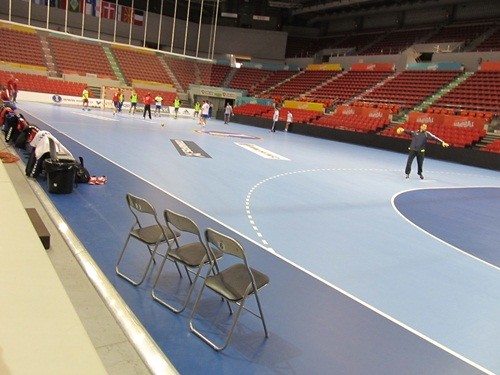 Usually when a world championship comes so soon after the Olympics, it could feel like watching a re-run of a program. Not so with the Handball World Championship that throws off in Spain today. There is a wide variation in the teams – with Olympic silver medallists Sweden not even making the cut – and an even wider variation in the squads, with many teams in rebuilding mode. Most of all, this would be the first major handball competition in over a decade not to feature Ivano Balić – probably the greatest handball player of all time. Below is a quick guide for the uninitiated.

Main storyline: Does France have the motivation to win another title? How much does homecourt advantage mean to Spain? Is Croatia better or worse without Balić? Can Denmark recover from its Olympic disappointment? Can Hungary take the next step? In short, who is actually the favourite?
Favourites: Probably France, but see above
Biggest rival: Spain
Outside bet for the title: Hungary
Expectations for the host: Spain will never have a better chance to win its second World Championship, as homecourt advantage usually counts for a lot in handball tournaments.
Spain’s best player: Julen Aguinagalde (pivot)

Five unmissable group games:
Slovenia – Poland (15 January), I think this game could decide who tops Group C (and likely avoids playing Spain, Croatia and Hungary in the second round)
Croatia – Hungary (15 January), the first of three killer matches between the top teams in Group D
Iceland – Denmark (16 January), a possible decider for the top for Group B
Spain – Hungary (17 January), a rematch of a fairly one-sided game from the Olympics is likely to be a lot closer this time
Spain – Croatia (19 January), this could be all about placement in Group D, with the teams that finish first and third likely to avoid meeting France until the Final

Every team in a sentence (in my predicted order of finish):
Denmark – I think the Olympics were a blip, as this team has talent across the board, good chemistry and a clear tactical approach
France – for a team that did so much to crush French stereotypes, it is funny that it enters this tournament facing a typical French question – do they care enough?
Spain – injuries to key players (playmaker Raúl Entrerríos and left wing Cristian Ugalde) could end up being the difference between winning the tournament and a disappointing finish
Slovenia – could be the surprise of the tournament, riding on the back of a wave of success for its top three domestic clubs
Hungary – would be targeting a medal and are capable of getting one, but the draw has left them with an unfavourable road to the top
Croatia – would team chemistry improve without Balić? and would that be enough to compensate for the decline in quality on the court?
Iceland – without Beijing 2008 stars Ólafur Stefánsson and Alexander Petersson, playmaker Aron Pálmarsson assumes leadership of the team at the tender age of 22
Macedonia – Kiril Lazarov will get his goals, but it is more the favourable draw than any obvious strengths that could see Macedonia reach the quarter-finals
Poland – with every tournament this team looks more like a work in progress and less like the 2007 World Championship runners up, but the departure of legendary coach Bogdan Wenta is the biggest change yet
Montenegro – have overachieved just by beating Sweden to make the tournament, and might cause a few more shocks before they’re done
Belarus – I don’t think it’s unfair to call Belarus “Siarhei Rutenka and 15 other players”
Tunisia – Indisputably the best non-European team, but a long way from being a contender
Russia – so much happens, and yet nothing seems to change in Russian handball for more than a decade now
Germany – Germany remains a team in transition, with more and more young players being integrated into the team in place of the generation that won gold on home soil in 2007
Egypt – no longer a team that the Europeans fear
Serbia – a full-on rebuilding programme after a humiliating performance at the Olympics, and only a year after finishing as runners up at the European Championship held in Serbia
Argentina – there’s a third Simonet brother! and Argentina remains one of the most fun teams to watch
South Korea – like many of the teams that follow, South Korea is really here to make up the numbers
Algeria – Africa’s third best team was actually one of the better performers at the last World Championship, but a repeat is unlikely
Qatar – a trial run ahead of hosting the tournament in 2015
Brazil – another team that is just happy to be in Spain
Chile – will struggle to compete without its one Champions League-caliber player – Marco Oneto – who is out with an injury
Saudi Arabia – the Saudis will just be glad that Australia is there to make them look better
Australia – the perennial laughingstock of World Championships, and there is no reason to think this time would be different