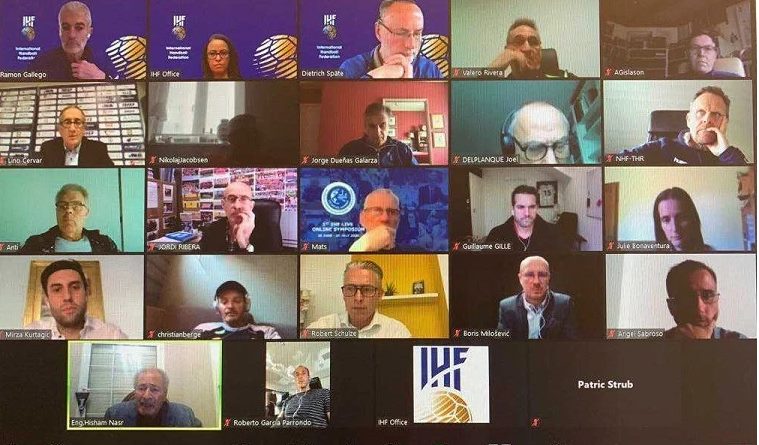 In an effort to continue the growth of handball and, in this case, indoor handball, the IHF held a virtual conference with more than 15 top European coaches and referees last week (15 October) to discuss current considerations regarding development, upcoming rule tests, suggestions for rule modifications and improvements to rule interpretation.

The conference was initiated following an extensive and always ongoing process of analysis of championships and tournaments around the world on the part of the IHF Playing Rules and Referees Commission (PRC) and the IHF Commission for Coaching and Methods (CCM). The meeting was led by the chairmen of those commissions, Dietrich Späte and Ramón Gallego, respectively.

IHF President Dr Hassan Moustafa opened the meeting by welcoming participants and stressing the importance of regular meetings between coaches and referees. He continued that the main aim of this meeting is to study how to make handball more attractive to the world and attract younger generations to the sport. He added that the coaches and referees in this meeting are role models for the younger generation.

‘Which direction do we want to further develop our game?’ which covered the speed of the game, technical and tactical development and more were the starting topics for discussion.

The meeting continued with a conversation about the goals of game and rules development. The goals include simplifying the rules to ensure better understanding for all involved in the matches including media and spectators, stopping negative trends, guaranteeing player health is protected and fewer interruptions during matches.

Afterwards, participants examined a number of current discussions and proposals such as offensive fouls, passive play before and after the forewarning signal, progressive punishment especially in the pivot zone, player provocations and/or overreactions, seven-against-six and extension of the IHF video proof systems that have been used at major championships for some years now.

The session concluded with information regarding the upcoming IHF Men’s World Championship in Egypt in January.

“Today’s meeting with European coaches and referees was very productive,” said Dr Moustafa. “I am excited to see these discussions progress over the next couple of months and watch our sport continue to grow and develop around the world.”

All IHF events in recent years have been analysed by the IHF PRC and CCM, and the outcomes have been published in the IHF Education Centre. Furthermore, the IHF have increased communication in a number of ways. These communication measures have included meetings with head coaches directly before World Championships and continental championships and presenting on the current considerations regarding rules and game development during the 1st IHF Live Online Symposium.