Who will celebrate and who won’t achieve goals in the upcoming months at the VELUX EHF Champions League 2015/2016? Who will lift the trophy at Lanxess Arena? Who will be the heroes of the season and who will disappoint? HANDBALL-PLANET.COM tried to find answers on the most interesting questions linked with the European elite competition from the guys who will create handball scene in the next 8 months – players and coaches. We asked the representatives of all 28 teams to make representative survey about favorites, outsiders, teams who will surprise or make their own fans sad.

Polls were anonymous in order to get the most honest answers from the handball stars. Fortunately, they did a tremendeous job.

FC BARCELONA AND VESZPREM WILL WIN THE GROUPS

Undoubtedly, the two biggest favorites to win the Group A and Group B are  Hungarian Veszprem and Spanish FC Barcelona. Two best teams from the last season, when they meet in the EHF FINAL4 final clash in Cologne, have the greatest potential in the eyes of their colleagues to finish at the TOP the first part of the season.

Hungarians won 65% of support on question “Who will win Group A” ahead of powerful PSG Handball with 35%. These teams are only with the chances to win the Group according participants of our Survey. 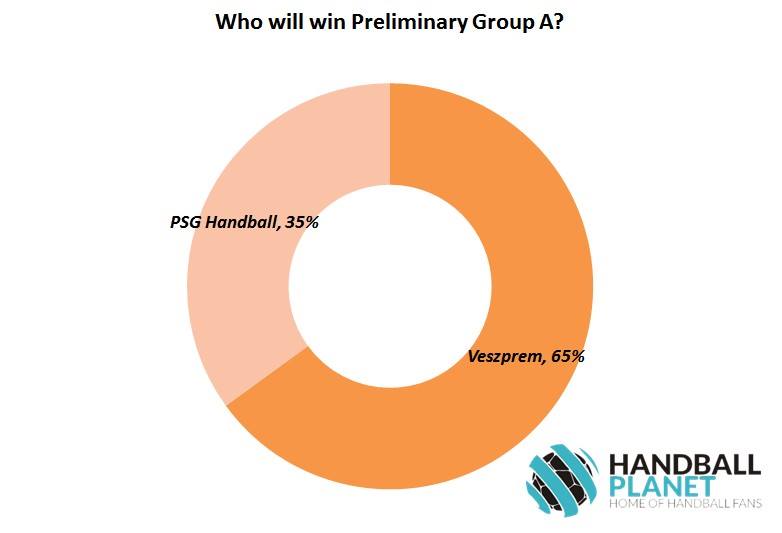 There is even bigger faith that reigning champions FC Barcelona will win the Group B. Exactly 83% have that opinion, while the biggest threat for Spaniards in the first part of the season will be the Polish powerhouse Vive Tauron Kielce with 17% of votes. 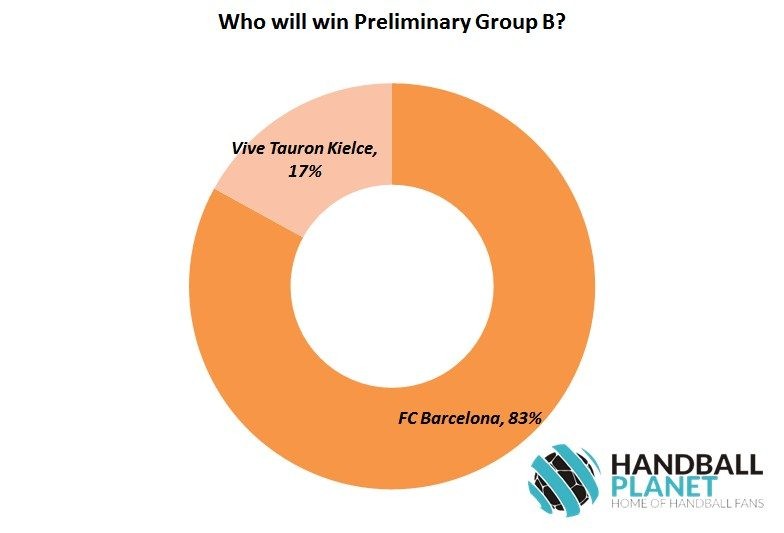 BESIKTAS AND KRISTIANSTADT ARE TOTAL OUTSIDERS…

A lot of interesting answers we got on the question “Who will be the last two teams in Group A and B?”. From this season, the 7th and 8th position in these groups means the end of European season for some teams.

The team with almost no chances to go further in Group A is Turkish champions Besiktas MOGAZ (95%). The second team who is under line in Group A – RK Celje Pivovarna Laško (58%) also didn’t aware in their own qualities players and coaches across Europe. Teams who will fight to avoid position “under the line” will be Polish Orlen Wisla Plock (21%) and RK PPD Zagreb (16% of all votes). 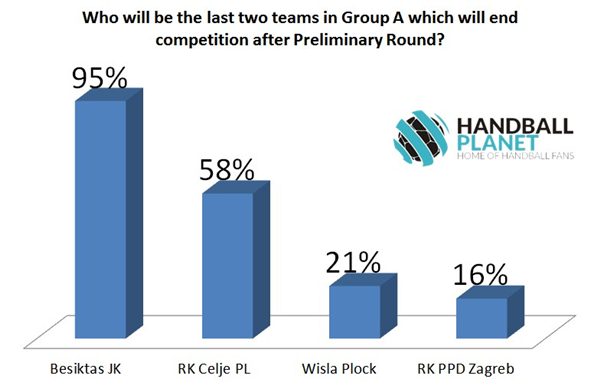 The Swedish TOP team Kristianstadt (95%) are In same situation as Besiktas in Group A. Almost nobody believe that Ola Lindgren and his boys can avoid the early finish of the European season. The two serious candidates to disappoint their fans in upcoming season are KIF Kolding Kobenhavn (47%) and French Montpellier Handball (37%). There are some opinions that PICK Szeged and Vive Tauron Kielce could surprise negatively… 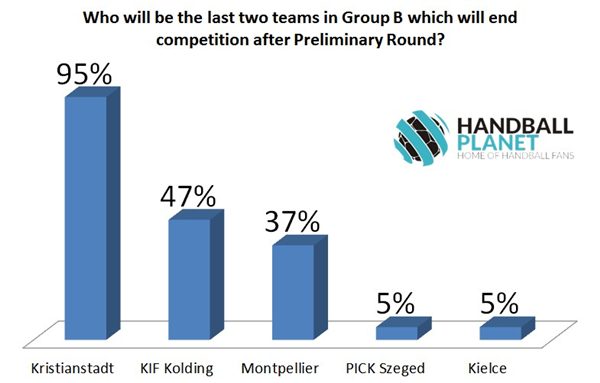 MESHKOV AND SKJERN TO REACH TOP 16

One of the most interesting questions was “Who will reach the TOP 16 from the Groups C and D?”. The “second  chamber” of EHF Champions League will have 12 teams in two groups. Best 4 (two per group) will compete in the “small semi-finals” for the place at TOP 16 where they will face teams from Group A and B.

The team with the highest chances to qualify for the knock-out stage is Belarussian champions Meshkov Brest (47%) ahead of the Danish vice-champions Skjern (37%). The teams who could reach “small semi-finals” are Swiss TOP team Kadetten Schaffhausen and Spanish runners-up Naturhouse La Rioja (both 27%). The biggest threat for Kadetten and Skjern in Group D, but also in general for the place in TOP 16, could be Ukrainian Motor Zaporozhye. Some chances have also Tatran Presov, FC Porto and RK Metalurg according the votes of EHF CL players and coaches. 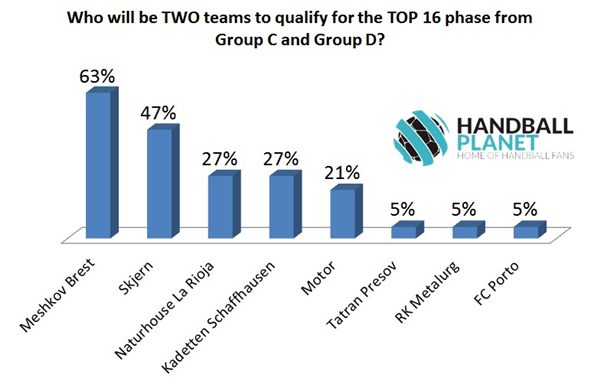 For the first time in the history of the VELUX EHF FINAL4 in Cologne, next year, based on the votes of EHF CL players and coaches, German teams won’t compete at Lanxess ARENA! Nine teams in total have potential to be there, but among the first four with the highest chances, aren’t any of three German teams.

However, the biggest chance to be there for the third time in a row have Hungarian Veszprem (89% of examinees think that) ahead of reigning champions from Barcelona (79%) and the richest team in the world – PSG Handball (79%). These three powerhouses of the European handball are in warm-up for the show in Lanxess Arena far ahead of the others. 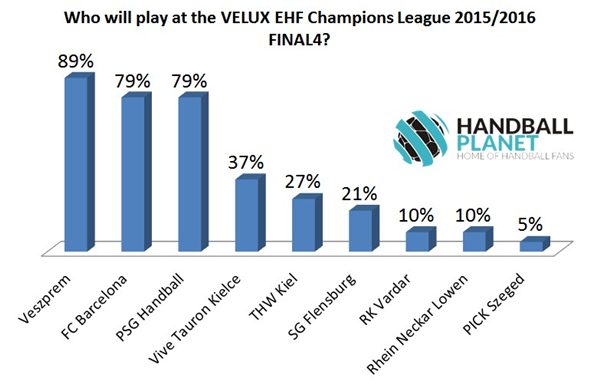 ONLY THREE TEAMS CAN WIN THE TROPHY – PSG, VESZPREM AND BARCA!

The biggest favorite to win the VELUX EHF Champions League 2015/2016 is PSG Handball! The powerful French champions with new signing Nikola Karabatić and bunch of TOP handball stars put the pressure on their back from the start. Exactly 47% of EHF CL players and coaches of all teams think that Zvonimir Noka Serdarusic boys will raise the trophy in Cologne. Very big chance to that have also Hungarian Veszprem with 42%, while same chance to defend title have FC Barcelona (11%). 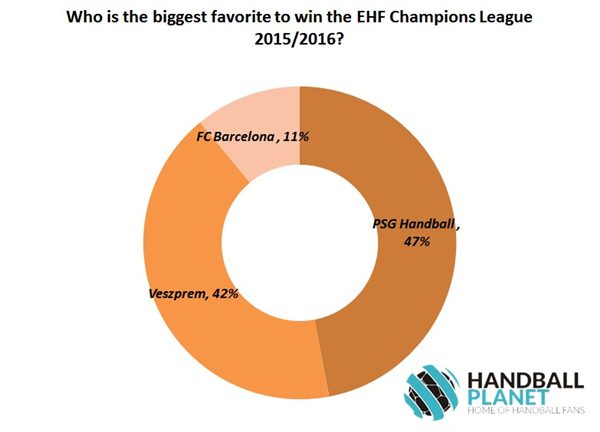 A lot of different answers we got on questions “Who will be positive/negative surprise of the competition?”. The team who could raise the performance in comparation with last season is SG Flensburg. There are PICK Szeged (21%), RK Vardar, PSG (both 11%) and few other teams… 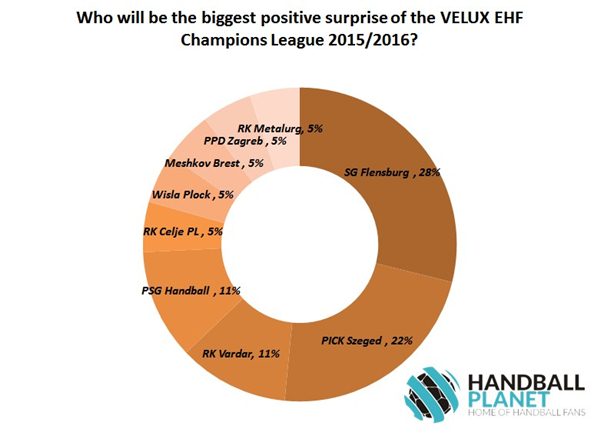 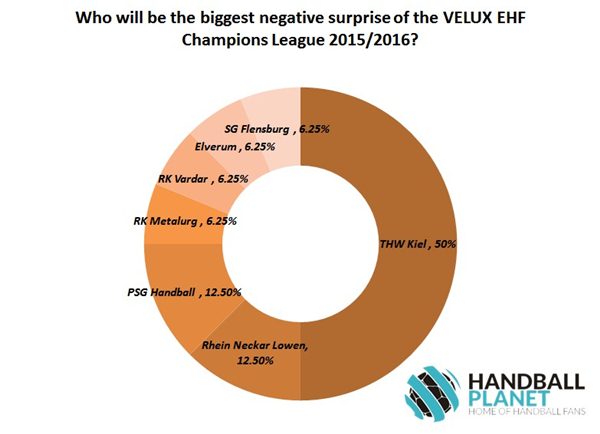 Much more united opinion have players and coaches about the team who will play under the level this season. That would be THW Kiel (50% of examinees think that).

The same faces are linked with the title of the VELUX EHF Champions League 2015/2016 TOP scorer! The biggest chances to win the “Golden Ball” for the third year in a row has Veszprem’s bomber – Serbian left back Momir Ilić (37%) ahead of his friends from the last year race – Mikkel Hansen from PSG with 21% of all votes and Kiril Lazarov (11%), alongside Flensburg’s magic wing Anders Eggert. 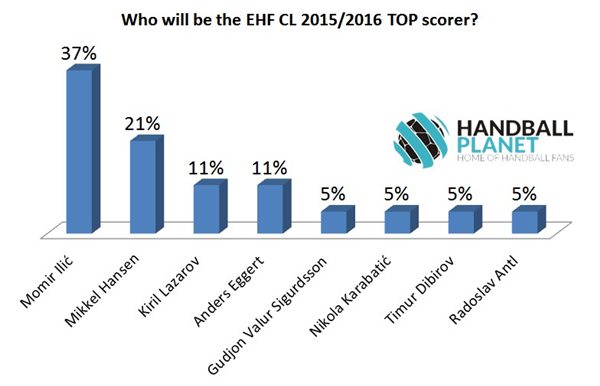 NIKOLA KARABATIĆ – THE BEST OF THE BEST

Who will be the VELUX EHF Champions League 2015/2016 Most Valuable Player? It seems that question wasn’t necessary – HP and IHF World Player 2014 Nikola Karabatić is inspiration for his colleagues with 55% of votes ahead of his team-mate Mikkel Hansen (21%). New Veszprem star Aron Palmarsson got 11% of votes just ahead of his team-mates Momir Ilić (8%) and Laszlo Nagy (5%). 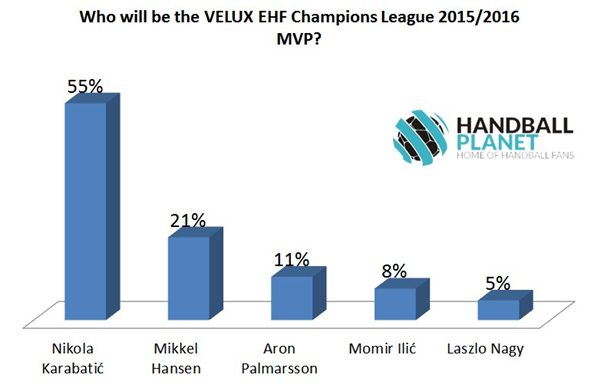 MIKLER AND STERBIK IN BATTLE FOR THE BEST GOALIE

The highest chances to win the award of the VELUX EHF Champions League 2015/2016 goalkeeper have Veszprem’ star Roland Mikler and RK Vardar member Arpad Šterbik (both 31%). The current and former star from Veszprem Arena showed their TOP quality during the last season, but there are expectations that they will keep the same level of performance in the upcoming season.

The “bronze” position holds PSG star Thierry Omeyer with 13% of votes ahead of Danijel Šarić and Niklas Landin (11%). The last, sixth on the list of the greatest goalies, is second Veszprem member Mirko Alilović (3%). 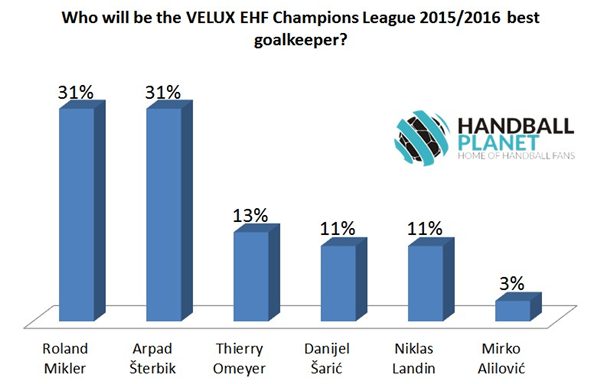