WILBEK SUPPORTS LANDIN: Good that you did not choose Barcelona! | Handball Planet 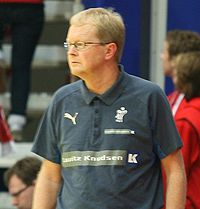 The current sports director of the Danish Handball Federation, Ulrik Wilbek, has expressed his support for the Danish national team goalkeeper Niklas Landin for having chosen THW Kiel as his club from the season 2015. “Niklas is accustomed to the Bundesliga now. And it is very good that he did not choose FC Barcelona, as there is no one to play against in the ASOBAL, and there won’t be any development on his side.” said Wilbek

Niklas Landin joined Rhein-Neckar Lowen in 2012 and contract expires in 2015, when he will move to THW Kiel.