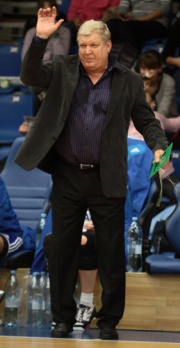 The coaching staff of togliattian team has changed. Due to health problems the Head coach of “Lada” Yevgeny Trefilov is released from the team until the end of November.

For the next match in Krasnodar the handball players will fly on Monday morning, and they will be lead by Aleksander Ovsyannikov, along with Lyubov Kalyaeva. During the absence period of Trefilov, Aleksander Khomutov from “Lada-2 “will also join the coaching stuff of “Lada” and tonight he already participated in the first training session with the team. But he will not fly to Krasnodar because he is preparing the second team for the travel to the third round of the championship of Russia among double teams league in Rostov-on-Don. Upon his return, “Lada-2” will be lead by Alexei Zhavoronkov, which currently trains the Togliattian team KSDYUSSHOR “Olymp”. As for Trefilov, in the current month he will be busy restoring his health, and then he will come back at his position.

– After many experienced recent stresses, I feel that my body is out of order – says Yevgeny Vasiliyevich – Before the match, with “Dynamo” I visited a doctor and he confirmed my fears: my health is deteriorated. I have high blood pressure. It is also suspected that a couple months ago, around the time when the executive committee of the Russian Handball Union had a meeting and where I was dismissed by the position of head coach in the national team, I suffered without feeling a micro heart attack. Did this happen of not I do not known exactly. It will be necessary for me to do in-depth computer tomography. But I have to take a moral break from work, undergo at certain course of treatment is necessary. If everything goes well with health, at the end of November, I’ll be back.