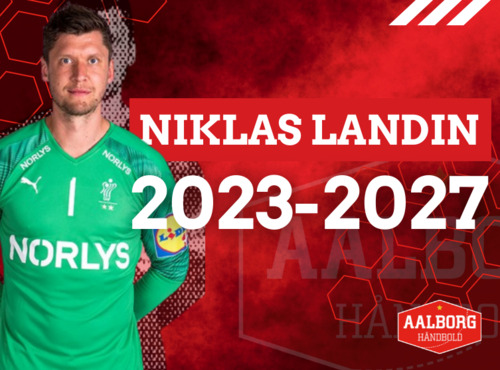 The Danish world star Niklas Landin will change from the summer of 2023 to Aalborg Handball on a 4-year contract.

In his career, Niklas Landin has built up an impressive CV, which under the auspices of the club, among others. counts German champion and EHF Champions League winner, while he with the Danish national team has helped to win both the Olympics, World Cup and European Championships.

Personally, the world-class goalkeeper has also reaped a lot of honors. In 2019, he was named the world’s best player by the International Handball Federation, and last week he received the same prestigious award for 2021. Niklas Landin is thus the first male player to win the prestigious title twice in a row, as there was no found a winner in 2020.

In 2008, he made his debut on the Danish national team, and he is now listed for 241 matches in the national team. Today, Niklas Landin is the national team captain, and for the past two seasons he has been named Male National Team Player of the Year for the second and third time in his career, respectively.

At club level, he has since 2015 represented the German big club THW Kiel, and from the summer of 2023 he pulls on the Aalborg goalkeeper uniform – and that is of course something that pleases a proud director.

– It is huge for all of us in Aalborg Handball. Niklas has proven over the past many seasons that he is rightly considered to be the world’s best goalkeeper, and it is of course with great pride that we can now present him. He has time and time again decided some of the greatest handball matches, and his unique qualities speak for themselves. I am sure that he will be a decisive factor in the hunt for even more titles for the club, says director Jan Larsen.

Niklas Landin most recently played in the Danish league back in 2012, and the main character is looking forward to a reunion with everyday life in Denmark and not least to become part of Aalborg Handball.

– I have had some fantastic years in Germany, but recently there have been some family challenges that we solve best by returning home to Denmark. At the same time, I also continue to have great sporting ambitions, and here Aalborg Handball was the perfect match. I have of course followed the great performances the club has performed, and have also visited several times and experienced the fantastic atmosphere in Sparekassen Danmark Arena. It has impressed me, and I am really looking forward to being a part of the project, says Niklas Landin.