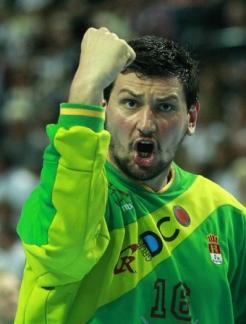 Now it is official! Legendary Spanish goalkeeper with Hungarian origins and Serbian handball school in his bones, Arpad Sterbik (35) will probably finish proffesional career in RK Vardar Skopje. Sterbik has signed four-years contract with Macedonian vice-champions with the highest possible ambitions. That means he will stay in MAcedonia until 201, two years more than in Barcelona by his current contract which last until 2016.

He also played for Hungarian MKB Veszprem between 2001 and 2004, while his proffesiona start is linked with small Serbian team RK Jugovic Kac, with whom he made the biggest success of Serbian team handball in XXI century, winning the EHF Challenge Cup in 2001.

– Vardar is the team of rich tradition and huge ambitions. I see myself in the new project, that will be a big challenge for me. I hope that we will make a lot of success in the next four years, and to lift the club on the higher level, because Macedonian handball deserves team who will fight for the titles – says Sterbik.

Some sources speaking about transfer fee sum about 500.000 EUR.