It’s been only four days since IOC president Thomas Bach declared the closure of the third edition of the Youth Olympic Games in Buenos Aires and the Olympic flame was extinguished; nevertheless, the fire is still burning strong on many of us on this southern capital.

The Olympic spirit invaded the country for the entire duration of the Games; people responded in an overwhelming way, packing all venues and parks all 12 days of competition. A record breaking audience of 200,000 people attended the first ever opening ceremony that took place outside of a stadium, in a place none other than the iconic Obelisk, in the heart of the city. It’s true, the Olympic pass was free of charge and Argentinians tend to make use of whatever is free, but that doesn’t mean that the audience was not genuine.

On day 2 of competition, on October 8th, beach handball made its Olympic debut and that first day was a great measure of what it would be for all 6 days of competition in Parque Sarmiento, a part of Tecnópolis Park. The dynamism of the sport, the 360º jumpshots, the kempas and the nail-biting shoot-outs caught everyone’s attention and catapulted it to the top of the rakings among all 32 sports in the YOG programme. The fact that Argentina got medals in both women’s and men’s competition was definitely a plus. The support was massive throughout the competition and the main court, with a 1,300 seat capacity was rarely empty (only maybe on the first two days). It was hard to believe that, at times, people were queing under the burning sun, with hopes of getting in. Not just one or two people, we’re talking about lines of more than 200 metres. Plus all of the people that piled up against the fences that separated the pedestrian path from the mixed zone and field of play.

The Argentinian Handball Confederation (CAH) seized the moment by posting on Saturday afternoon, after the success of the national teams, a tweet that called out for beach handball enthusiasts, asking their age and region, in order to catch the momentum and somehow reply the constant question raised shortly after the beginning of the competition in the Youth Olympic Games: “Where can I practice beach handball?”. Until yesterday, and according with an article published by the CAH, they had received more than 1,000 emails requesting information regarding where to practise this ‘new’ sport.

It is hard to believe that only three years ago, all beach handball teams from Argentina trained in a single court that had stones mingled with the little sand that was left; players and coaching staff had to arrive early in order to have time to clean the court before trainings. Hard to imagine that the goals had to be set up every single day, because the existing ones were beach soccer goals, which were bigger. Trainings had to be during the day, because there was no lighting surrounding the court. Ironically, or not, the five courts that will now stay for good, the ones that saw all 24 Olympic participating teams warming-up and playing official matches, are within walking distance from that single lightless court that saw the beginning of this Argentinian dream. 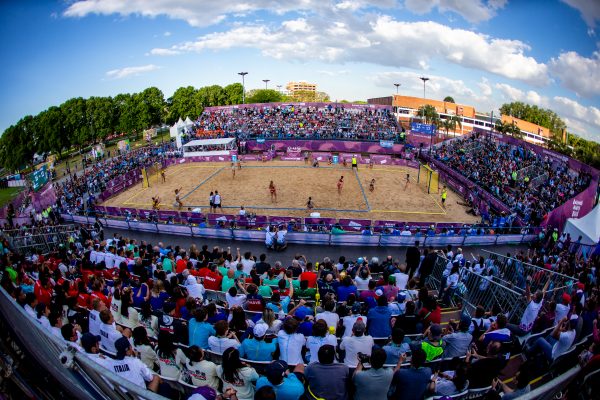 Three years ago, the IOC announced that they would replace indoor handball for it’s sandy version. Only then, most of the teams that would take part in Buenos Aires 2018 found out that they had to change their entire plans. Beach handball is an absolutely different sport from the one played indoors, and when you’re looking forward to an Olympic appearance, it can definitely be traumatic to have to change your entire planification and strategy. Most of the Argentinian boys and girls that were getting ready for this YOG were not familiar with beach handball at all. But there weren’t many options, everyone had to change their footwear and overall dresscode and learn new techniques and moves.

The journey to Buenos Aires 2018 was not smooth at all, that’s why the results were even more satisfying and rewarding for Argentina. Both women’s and men’s teams were third in last year’s Youth World Championship in Mauritius, and that boosted their hopes for the Olympic debut on home soil. The support of the home crowd was unexpectedly overwhelming and a help in the nerve-racking moments (aka shoot-outs). Media were talking about beach handball and its spectacular moves; and of course, there was also room for a polemic discussion, more proper of the past century than of this one: the size of the bikinis. Fortunately, the results turned out to be much more praised and had much coverage than that untimely conversation.

The boys picked themselves up from the lost semifinal and won the bronze medal match, while the girls thrilled everyone with the gold medal in a 2-0 final against Croatia. According to many media outlets, beach handball was one of the sports that caught most attention and reached the highest peak ratings on television during the Games. The ‘Kamikazes’ (a name that was chosen by a specialized journalist that accompanied the woman’s national team since their very beginnings, now passed on to the youth team) were on the cover of many national newspapers the morning after their coronation as Olympic champions and have been to nearly every single one of the major TV stations and sports channels in the country. A mediatic moment for beach handball like never before. Will the CAH be able to keep up the momentum and take advantage of this new beach handball fever?

If we talk about the success of the sport in its Olympic debut, we must say that maybe if Argentina hadn’t obtained medals in both men’s and women’s, the excitement wouldn’t have been so resounding. But the crowds spoke for themselves. If the appearance of beach handball in the Youth Olympic Games programme was a test to check its viability and possibilities to be an exhibition sport in Tokyo 2020 or to go straight into Paris 2024, then we must be calm and assertive: beach handball will, sooner or later, have to be a part of the Olympic programme. It has all of the seasoning needed to be one of the starring sports and IOC president Thomas Bach himself enjoyed the show from the stands on the final day, accompanied by IHF president Hassan Moustafa, who attended every single day of the competition.

Beach handball has given the CAH the only medals in its 97 years of history (the women’s 2nd place in World Games in Wrocław 2017, the two bronze medals in Mauritius 2017 and a bronze and gold on YOG Buenos Aires 2018), so maybe it’s time for Argentina to make use of the inertia and further develop this discipline; and for the IHF to use the success of the YOG Buenos Aires 2018 to boost the idea of having the sport in the Olympic programme in the near future, without having to replace it for its indoor version. It has been proven, particularly in the past two editions of the Summer Olympic Games, that handball is one of the most successful sports; and having the example of indoor volleyball and beach volleyball coexisting since Atlanta 1996, there shouldn’t be any problems for these two disciplines to do the same.